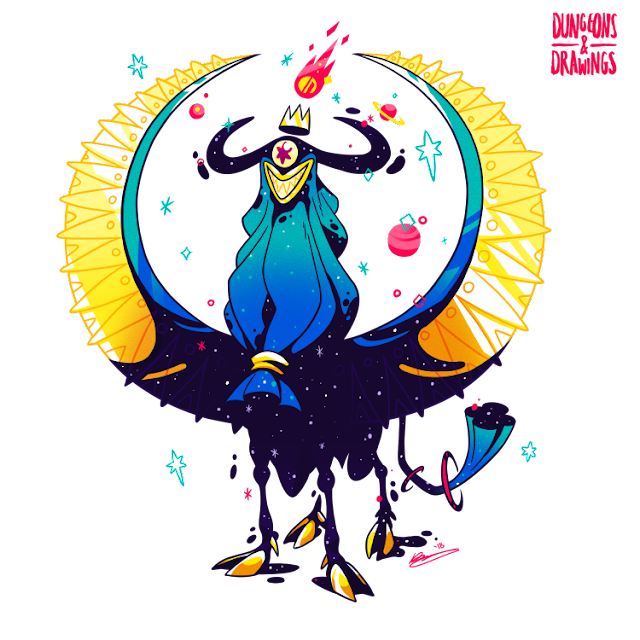 The shedim are a group of chimeric beasts somewhat related to sphinxes and the lamassu. Though not holy in the planar sense, shedim will often work with clerics and help them with their questions. Some suspect that shedim were kings in the past, which the creatures neither confirm nor deny. These days they spend a good deal of time hopping between the Ethereal and Material planes, guarding the world from Chaos.

So shedu/lamassu are kinda interchangeable folklorically, though some people will argue that lammasu are leonine, that shedu are bovine, that lammasu are female... But they exist more as artwork than in stories. You'll see them as these absolutely massive reliefs and statues from Mesopotamia. These statues are really neat because they have a little bit of trickery going on. The shedu is carved with five legs, but not in a way that implies that it actually has five legs. Looking at it from the front, you only see the two front-most legs, showing that the shedu is standing there, guarding. From the side, you see four legs, showing the creature walking instead of standing (one of the front legs is hidden by the profile).

(The shedu in the Fiend Folio is supposed to have five legs, but I couldn't make it look good, so the drawing only has four).

Like I said, there aren't that many stories about them that I've found. Apparently they show up in The Epic of Gilgamesh, but I've only been able to find mentions of bulls without specifying whether they have wings and human heads. But they seem to be associated with celestial bodies. So I made the shedu out of space. 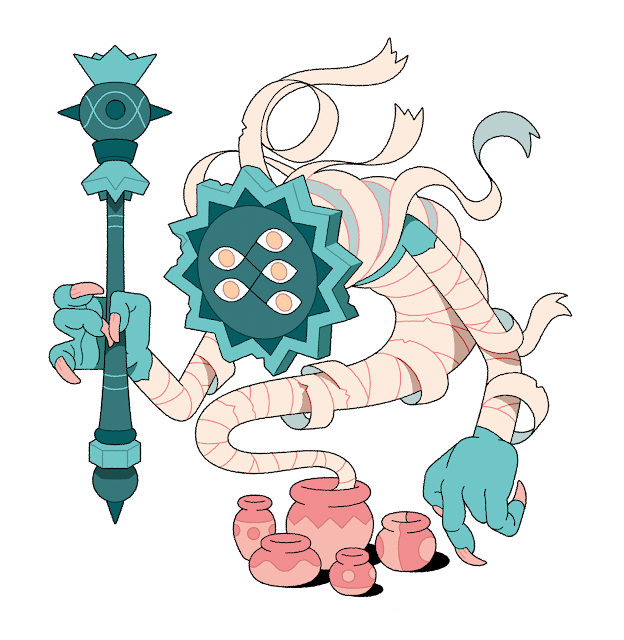 The elvish archaeologists who broke open the tomb of Ilexandra, Fifth Mage-regent of the Riverlands, were overjoyed at their find. As according to custom, her body was found cut into pieces, wrapped in spider-silk cloth and interred in five jars alongside her royal scepter - attuned with a spell allowing control over lesser undead - and an ornate jade death-mask carved with five eyes to denote her lineage. They supposed the discovery - complete as it was, and perfectly preserved - would surely be hailed as one of the greatest of their age.

The chief archaeologist's journal entry for the day notes the faint aroma of a lingering magic spell over the long-dead queen: "Most likely a charm to prevent decay, and perhaps discourage interference by the giant subterranean mole-rats of the region."

The journal was found almost a week later by a search party, amongst a pile of broken equipment, torn clothing and inexplicably rusted weapons found just outside the tomb. No bodies were ever found, but since the Old Elvish words for "KEEP OUT" had been daubed on the great stone door (apparently in fresh elf blood), they never actually set foot inside ever again.