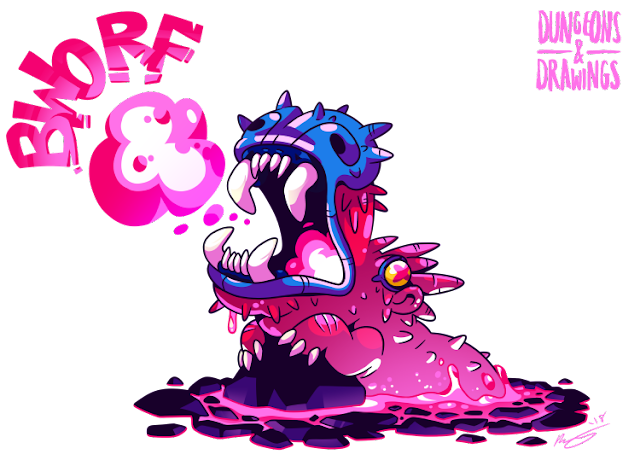 Like all of Tiamat's more animalistic spawn, they exude an aura which protects nearby spawn from certain effects. In this case, it provides immunity to fire. This makes them potentially excellent mounts for whitespawn, since it can cancel out their weakness.

It's been a while since I've done anything for Dungeons & Drawings. I've been having a really really bad art block for the last several months. I didn't seem to like anything I drew. And while I still don't feel like I'm completely back to my comfort zone, I am gradually liking the last few things I've been drawing more.

Anyway, the firebelcher. Their entry describes them as often swimming around in lava pools. Well the first thought that came to my mind was crocodiles, but I really didn't want to go in that direction. The old red dragon illustration was vaguely mammalian anyway, so I went with basing this guy off a hippopotamus. Because hippopotami are horrendous nightmare beasts.