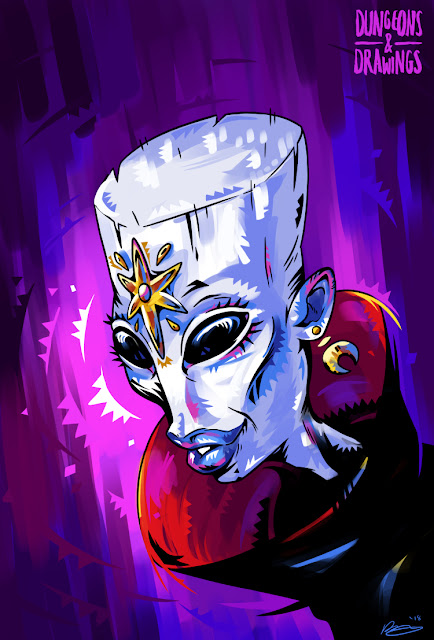 The LeShay are to elves what elves are to humans. Which is what this game needed: a more hoity-toity elf. It's possible that LeShay are even the true ancestors of elves, having seeded the Material Plane with their progeny. They're adept shapeshifters, able to appear as any humanoid, but their true form is that of a white elf-like creature with deep black eyes. And despite the unsettling appearance, looking at them give one a strange sense of longing and camraderie.

LeShay are not put off by locked doors. They will get in.

LeShay cannot be stopped by armour. They will get through.


I've been a little ehhhhhh about drawing lately. Artist's block. It happens somethings. Nothing I've drawn recently I've especially liked in anything beyond the thumbnail stage. The Halite animation I did was pretty much because I just couldn't make myself design and draw something new, so just animate something that somebody else has designed. Sometimes this loosens up my brain, sometimes it doesn't. I'm still kinda stuck, but it'll stop eventually.

I've been using Manga Studio for a while but mostly stuck to the same pen (the turnip pen does really nice crispy lines). After several attempts attempts on this I accepted that no matter what I did I wasn't going to be happy with it as a proper illustration. So experiment a bit with other styles of colouring. The colouring in this is mostly done with the flat marker tool for a more smudgy look. It's probably not something that I'm gonna add to my usual drawing style probably, but at least it looks kinda interesting.

Also I treated the LeShay like a little bit as a fairy fantasy version of what the Engineers were in the Prometheus movie. The illustration in the Epic Level Handbook is a little bit boring. Just a grey elf in some brown clothes. But I liked how the description had a bit of that alien-y fairy feeling.

(Not included in the image, but these dudes can manifest +10 keen brilliant energy weapons out of their own life force.)