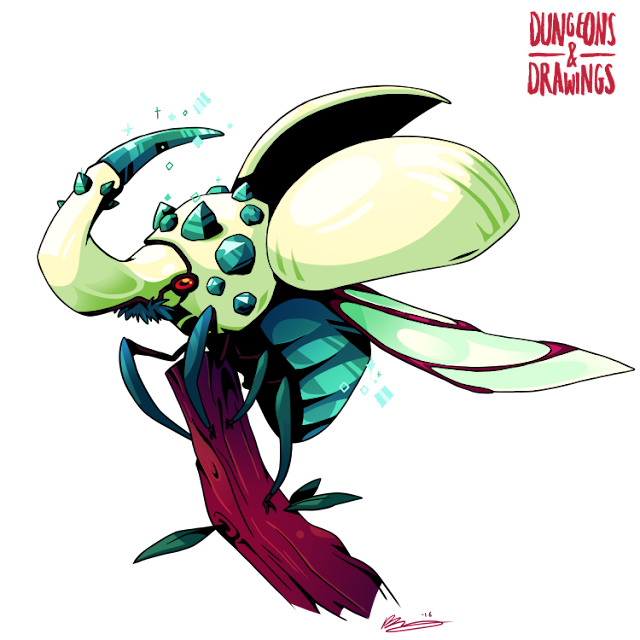 Gem scarabs are cat-sized beetles found primarily in deserts, though some miners claim to have seen them in especially rich caves. These scarabs are actually a pretty big problem for any occupation that relies on the collection of metal or precious stones, since they're the beetles' main source of food. As well as being big enough that their bites would leave a significant mark, the gem scarab is, of course, magically competent.

The colour of the gem is indicative of the scarab's spell's element; diamonds for light, emeralds for acid, sapphire for cold, etc... The spells are relatively weak and primarily used as a distraction so the scarab can fly or burrow away. However, if feeling especially territorial or threatened, the scarab can prove dangerous to common people and inexperienced adventurers.

So did you know that living beetle jewellery is actually a thing? Apparently the maquech beetle is this really docile little buddy, so some people have taken to attaching rhinestones and golden chains to them to make them into living brooches. It's kinda pretty, but it seemed weird to use a literal live animal as personal decor. Apparently you can keep them alive for 2-3 years if you make sure to take care of them, feed them, house them in a nice vivarium... But I really don't know how many people who'd buy a bug for a brooch would go through that trouble.

If you want a beetle brooch that badly, just go get yourself a piece of the bajillion insect-themed jewellery items that exist, geez.