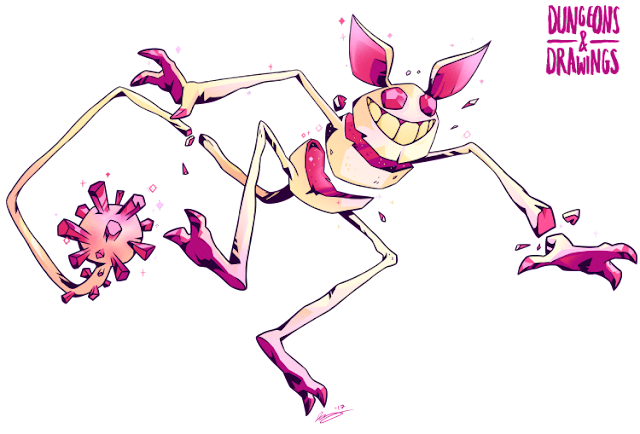 Some trolls are described as having especially stone-like skin, and the crystalline troll is this to a particular extreme. Like most other trolls, they're capable of regenerating their injuries, but their crystal structure makes them immune to acid, the standard troll-hunting aid. Of course, this monster isn't without its weakness. Sonic attacks disrupt the healing ability. So if you're going up to the mountains where these guys live, pack a bard.

The description called for crystalline trolls to be more glass-like, but I took inspiration from tourmaline clusters. When I rolled this creature I was a bit disappointed that it was pretty much just a troll made of shiny-stuff. The illustration in the book isn't really that interesting. But I liked the idea of maybe making it so the crystalline troll looks kinda normal (albeit smooth) on the outside, but if you cracked it you'd get these really bright solid gemstone inside. No guts or bones, just solid stone.

Also apparently you can choose these as player characters? But with level adjustment and starting hit dice, you'd only be able to play a 1st level crystalline troll in a 15th level campaign.