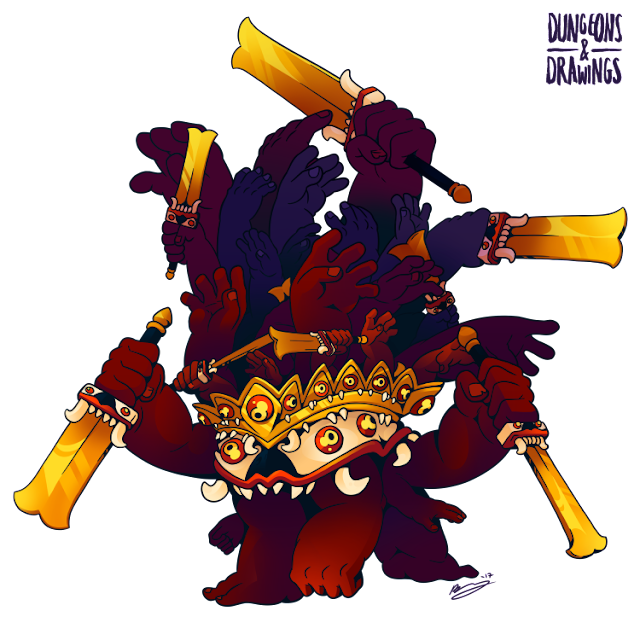 The Hecatoncheires -- the hundred-handed ones-- are one of those creatures from the dawn of the universe, when the gods were birthing freakish horrors all willy-nilly. There aren't that many of these creatures out there, which is fortunate, since the Hecatoncheires has one of the highest CRs in the game (57!) They don't have much in the way of magic, the way a lot of the creatures at that level of play tend to have.

It just has a heck of a lot of arms.

Good for you if you're a human-sized creature, because this fella'll only be able to get its arms in order to hit you twenty times in a turn (and it probably won't miss).

Okay, so I said they don't have much in the way of magic, but that doesn't mean they're completely non-magical. For one, on the very small chance that it feels it needs help, the Hecatoncheires can summon another one of its kind. So now you're dealing with 200 sword-wielding arms wanting to chop you into hamburger meat. Also, they can make themselves fly.

An average intelligence combined with the madness of 50 arguing heads means that they have little in the way of ambition outside smashing stuff. Probably the best way to get rid of a rampaging Hecatoncheires is to get yourself a really really powerful wizard to teleport it to an empty spot in the universe every couple of centuries.

In Greek mythology, the Hecatoncheires (there are three of them) weren't benevolent per se, but they were definitely less evil than the version in D&D. They got locked up in Tartarus by their father Uranus when he feared that they would usurp him. Later on, Zeus busted them out to get their help in his war against the Titans. As a reward, the Hecantoncheires now guard Tartarus, where the Titans are imprisoned. There's probably some poetic justice there.