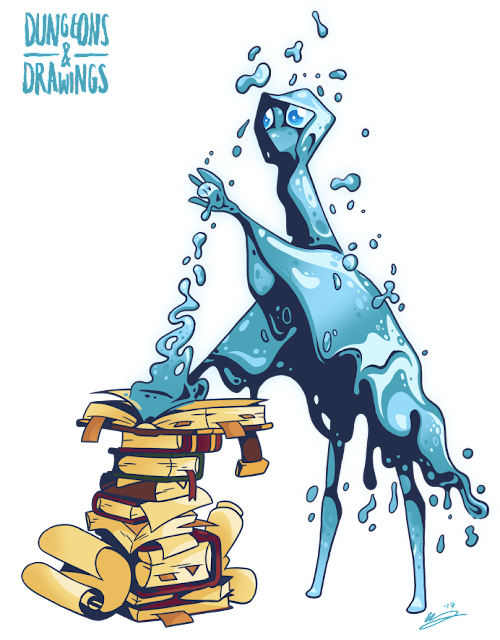 Illurien of the Myriad Glimpses is a mysterious creature living in a secret location in the Outlands known as the Atheneum Nefarious. Little is known about her or where she came from. Some theorize that she was created by the lich god Vecna, but this is unconfirmed. Those who have seen her describe Illurien as a silvery woman dressed in simple robes which seems to be made out of water. Her face is blank save for two penetrating blue eyes. She does not speak, but her voice patters like raindrops inside her head.

She is also one of the most knowledgeable creatures in the multiverse and her secret library is only second in size to Boccob's own. Each drop that makes up her body and floats around her represents a piece of knowledge that she's gathered over an indeterminate amount of years. The fine mist that surrounds her can daze nearby creatures by bombarding them with thousands of factoids at once. She can extend her body in a strike that sucks out the memories and thoughts of an opponent, leaving them a brain dead husk. Illurien's knowledge of combat techniques and psychology make her especially adept at dodging attacks simply by calculating the location of greatest advantage.

Ilurien of the Myriad Glimpses can be summoned to answer questions, but she must be treated with the same level of caution one would treat a demon. She cannot be trusted.

It was very very hard not to design Illurien in such a way to make her look like Blue Diamond from Steven Universe. Robed watery (blue) lady? Come on now. Eventually I came upon a design that made her look a little bit more alien and possibly ghostly, but I'm happy.