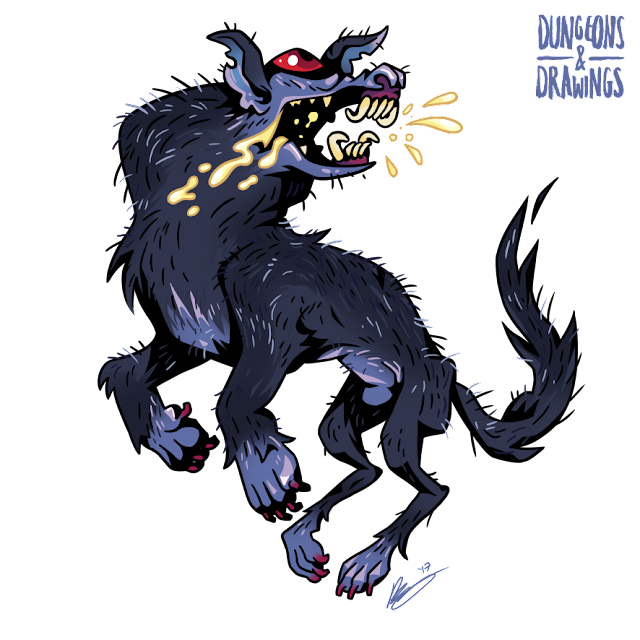 The barghest is the particular flavour of hellhound that stalks the ashen slops of the Bleak Eternity of Gehenna. The barghest is especially ugly, looking like a bulky mangy wolf with goblinoid facial features. This beast is capable of shifting between a fully lupine and fully goblinoid form, but primarily stays in its hybrid body.

What makes the barghest a challenging opponent is its stealth capabilities. While it can't fly, it can surpass obstacles by levitating. It naturally leaves no marks of its passage and high-level spells are needed to detect nearby individuals. Larger barghests can also render themselves and members of their pack invisible. A barghest grows by consuming the corpses of humanoid victims, eating flesh and bone so nothing is left. The scant availability of puny mortals in their volcanic dimension means that any unfortunate interloper will find themselves greedily sought after.

The Barghest is one of the many names that the ghostly black dogs of British Isles. This particular name originating from Yorkshire. Other national variants include the yeth hound (Devon and Cornwall), Gwyllgi (Wales), Moddey Dhoo (Isle of Man), Grim (Lanchashire) and just so many spelling variations of Black Shuck. Black Shuck may be the most famous of these names, but I can't be sure. All of them are large ghostly dogs, black-furred with glowing red eyes, and death omens. The Hound of the Baskervilles was inspired by these legends. The name "barghest" is the one I was most familiar with because it was in a book of mythical creatures I had as a kid. I can't remember the title though. I had a lot of these books.

I'm not sure where the whole shapeshifting into a goblin thing exactly comes from; I've only found once instance of a legend that claims that black hounds can shapeshift. My closest guess is that somebody read the term goblin-dog ("goblin" meaning "monster" rather than your contemporary fantasy Tolkein goblin) and went with that.