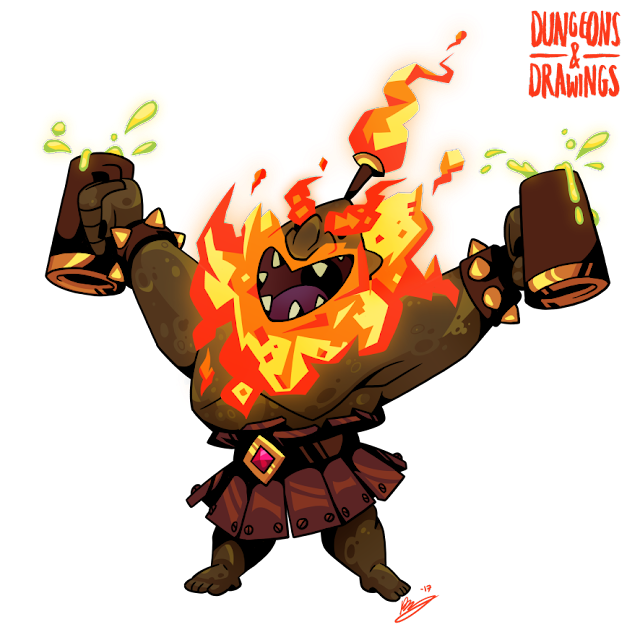 It's unclear whether the dwarves of the Material Plane and azers of the Elemental Plane of Fire are related. Both have a similar physical appearance and mode of thinking; both are short and stocky, bearded, diligent, regimented and master craftsmen. Was there a common ancestor? A dwarf that wandered into the fiery dimension, or an azer that cooled off here? Did the same gods create both? Or is it just happenstance?

The azers are one of the most prominent races on the Plane of Fire, a distinction they share with efreet and salamanders. However, of these three races, the azer are the weakest and their lives are a constant struggle to avoid becoming slaves to the efreet.

The concept of Elemental Planes is always a little bit difficult to wrap my head around. Like, shouldn't the Elemental Plane of Fire be exclusively fire? Should the Water one be just Water, Earth solid Earth? Isn't magma just liquid earth? Isn't smoke and ash hot air and dirt flecks? These dimensions always have a sky and ground and so on.

It's overthinking it, I know. It's magic and fantasy and stop dragging in real world logic into this, everybody knows Fire, Earth, Air and Water aren't real scientific elements anyway jeez. I guess these planes are just supposed to be most the -iness of the element than the element in its purest form. A mirror to our world, only the mirror's set on fire. Maybe there's a core of pure flames, but the rest of it's more of a Plane of Fieriness, fiery landscape, fiery creatures, fiery personalities, what Fire represents rather than just was Fire is.

Welp, worked that out for myself while writing. Good talk, guys, the next round of molten sulfur is on me.