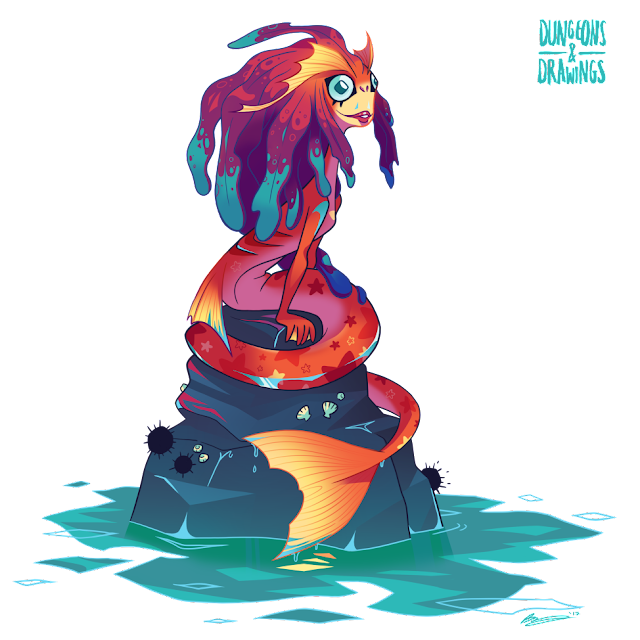 Of the sentient races that occupy the ocean, the merfolk are the most numerous, or at least visible. Merfolk are as fascinated with humans as humans are with them, most likely due to a physical resemblance combined with the allure of foreign lower body. However, any closer relationship between them is stymied by environmental requirements, though there are many stories of individuals using magical means to overcome that hurdle. Normally a marine race, freshwater variants have been sighted living in especially large lakes.

But the mischievous and playful nature of the merfolk doesn't mean that they're entirely harmless. Humans who abuse their waters or aren't careful with their nets will find their boats more likely to sink, or suffer greater punishment as the merfolk appeal to their own watery gods.

Yay, I got this done just in time for the end of Mermay!

There's a lot of legends about mermaids, but not so many that I've found about mermen. You get plenty of romances between fishy ladies and human men, but not so much the other way around. The British Isles have a whole buncha merfolk stories that mention the male half of the race, but while the females are pretty, the males tend to be less attractive (a design trend that continues to exist to this day). Think of it as the difference between the Zoras and River Zoras in the Zelda games. 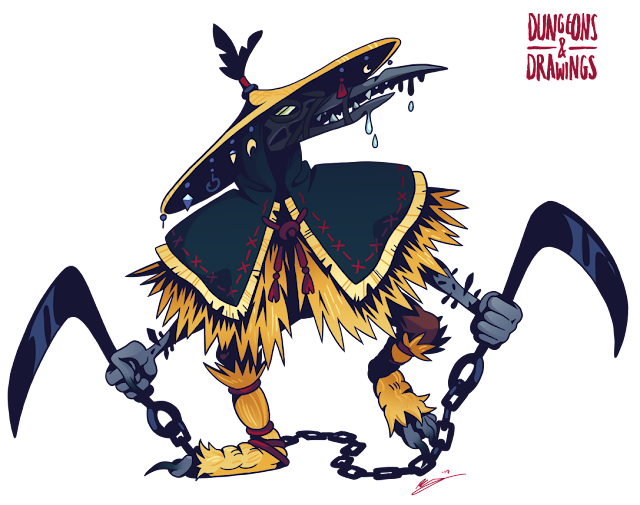 Once upon a time, there was a not terribly attractive human ranger named Fitz-Auk, who was part of a small group of infiltrators for the Molthune army. Shenanigans ensued during a mission, which ended up with almost everyone in the group either dead or sent off to other planes of existence. Fitz-Auk, being in possession of terrible luck, ended up in Abbadon, arguably one of the worst places in existence. A magic book he stole from his mission's target protected him in the three months he spent there, but couldn't wholly prevent him from being corrupted by the plane's malevolent influence.

Our friend Jonathan Harris made a comic, Adventures in the Fangwood, which is really good. You should buy it. It's pretty much the last session we did with our characters and details exactly what happened to them. It's very funny and well done and details the exact reaction I got when I rolled three natural 1s in a row (a 1/8000 chance!).

Fitz-Auk is a character I really wanted to bring back. Joe's Fangwood campaign was the first part in the trilogy of adventures, and since the final installment was going to take place on the non-material planes, I figured that'd be the perfect time to bring him back.

As a ranger, he had Morse as a raven animal companion (actually an eagle that we fluffed as a really buff raven), which he lost when he gave him to another PC, who took it with him when he got teleported to Heaven (read the comic, explanations are given). Since he's spent to much time in Abbadon, I imagined he'd been mutated into a more monstrous race. I spent a little while trying to choose between tiefling for hellishness or a tengu because I wanted him to look kinda birdy. I went for tiefling in the end because it fit better and had more stuff I wanted. Now Fitz-Auk is down from his human 7 Charisma to a delightful 4 Charisma! Yay!