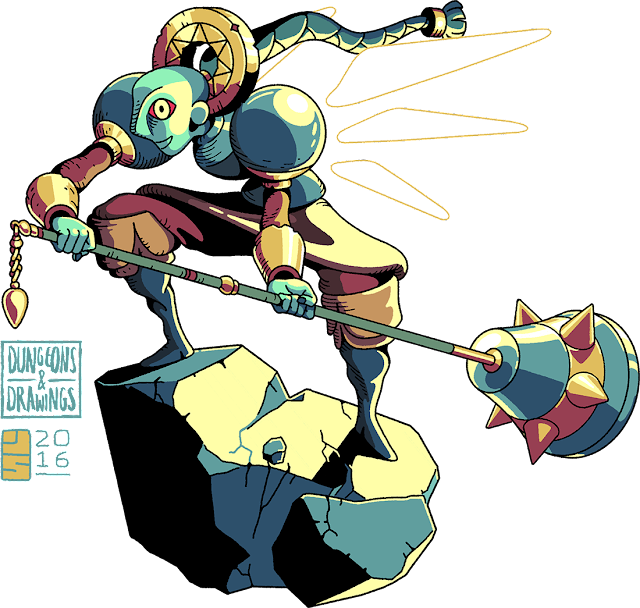 Planetar are but one facet of the many-sided jewel that is the angelic hierarchy. As a manifestation of goodness and law, angelic beings function as wardens against the spread of evil and chaos throughout the planes, and Planetar serve as elite soldiers in that battle.

While angels are without exception good-natured and compassionate beings, Planetar see it as their primary purpose to destroy evil wherever they find it - often with a violent fervour that other good beings find shocking. It is worth remembering, however, that as interplanar beings, Planetar have seen and experienced much that mere mortals never have or will. It is not inconceivable, therefore, that they are acquainted with far more powerful and malicious beings than will ever trouble the material plane, and that while their dogmatic attitude may seem unreasonable to us, their presence in the multiverse guards against many far greater evils.

Considering how much of a stereotype they are, I'm weirdly fond of both angels and their demonic counterparts in fantasy. These days it's rather common to put the whole "both bad but for different reasons" spin on it, where neither the angelic nor demonic powers are shown to be fully in the right, and some shade-of-grey via media is (perhaps somewhat patronisingly) offered as the "correct" choice.

While the allegory serves to demonstrate that dogmatic adherence to a way of being can be toxic - for example, the angels and devils in the Sandman series, or in Spawn, or even Bayonetta* (angels are beaurocratic pedants, devils debauched sadists) - it's fun to look at how and why each "side" justifies their actions. I quite like it when, as in settings like the Warhammer 40K universe, the "good guys" (the human Emperor and his minions) are capable of some truly horrible stuff - but the threat of Chaos is so much worse that you can kind of see how they justify it to themselves.

In D&D this kind of relates to the alignment system, too. Angels are Good, devils & demons are Evil. A lot of debate comes up around what is even meant by either descriptor; for what it's worth, I'm most comfortable completely separating Good and Evil as D&D concepts from good and evil as ethical ideas. Good, in the context of alignments, I take to simply mean "selfless". They do stuff for others more than for themselves. Evil means "selfish". Under this definition, a Lawful Good character can still be unpleasant, can still be horribly violent, can still be an utterly horrible addition to a party. Granted, in many instances this won't be the case, but I think the possibility for a nasty Good-aligned character (and, by extension, a nice Evil-aligned character) makes for interesting characterisation.

When I was colouring this I realised it reminded me a bit of Undyne from Undertale, which I was prepared to chalk up to unconscious plagiarism but then I checked and the first sketch of it was from March 2015 - before the game released!! In related news: this one took me a long while to get comfortable with. I gave up on it for a while, then happened upon the sketch again recently and decided to try finishing it. I think it's ok, although I still don't feel like I've quite zeroed in on the correct amount of detail for these things.

*NB: I have been playing a lot of Bayonetta recently and I'm super fond of its concept art can you tell????
Posted by Joe Sparrow at 16:41