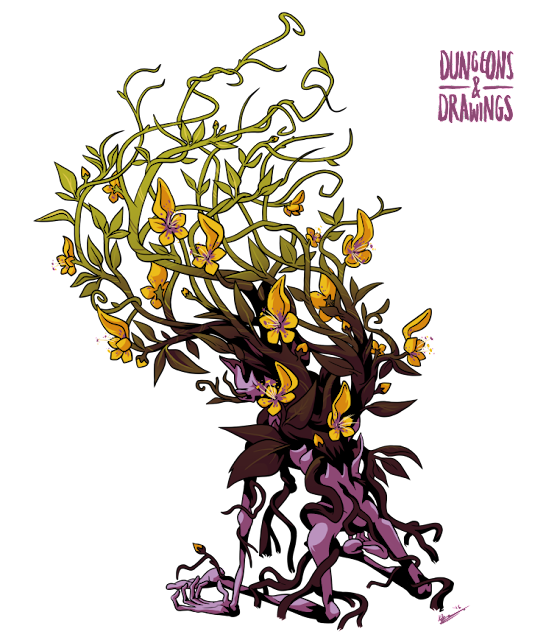 The yellow musk creeper is a parasitic plant that feeds on brain matter. The large yellow flowers of the creeper produce a spray of pollen when they sense the vibrations of nearby creatures. This pollen has mind-controlling properties which compel creatures to come within the grasp of the creeper's vines, which latch onto the victim and tunnel into the brain.

Those who have their brain destroyed by a creeper become a part of the plant's reproductive cycle. While seeds gestate within them, the host is compelled to stay close to the parental creeper to protect it against harm. When the host eventually dies through trauma or natural decay, a new creeper grows from the body at an accelerated rate.

The creeper is extremely resilient, able to heal damage deal to it quickly. Fortunately, it's as weak to fire and corrosive materials as one would expect from a plant. The plant is capable of movement, but is extremely slow.

One of my favourite creatures from D&D, though it feels a bit more of a natural hazard than a true enemy. It has an Intelligence score of 2 though, which puts it on par with dogs and other smarter animals so I suppose that distinguishes it from being a plant that just sits there.

Parasitic plants obviously exist in the real world, but they're parasitic because they latch onto the roots, stems and what-have-you of nearby plants to steal their nutrients. The yellow musk creeper is possibly inspired by the members of the infamous Cordyceps genus, a parasitic fungus. Some of these fungi essentially turn insects into zombies, forcing them to climb to high places and starve to death to ensure better distribution of their spores.