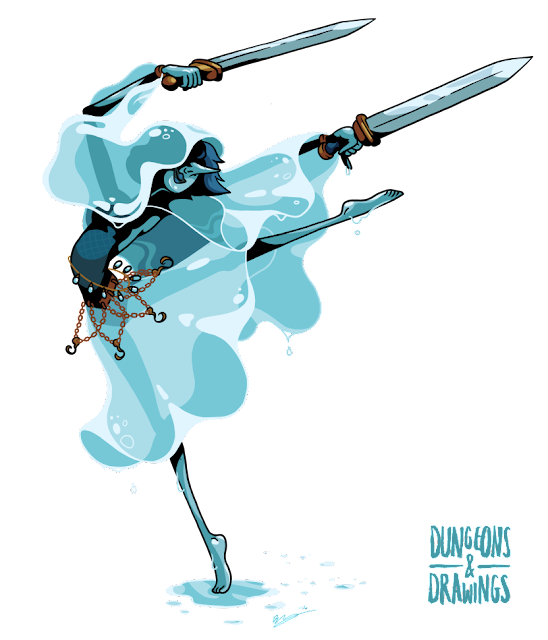 Flagella is no more. Driven into a blood frenzy by a cursed sword, Flagella was surrounded by endless waves of undead. Her companions were unable to break her from the sword's enchantment, and the necropolis' fail-safe engulfed everything outside the safety zone in cleansing flame. Flagella's corpse was left in such a crispy state that only potent divine magic would be able to ressurect her. Divine magic beyond the party's reach. After some traumatizing attempts to communicate with her soul, the party decides that the best thing would be to let her rest. They placed her remains on a pyre at dawn, and her ashes were scattered by the desert wind.

Meanwhile, Ahp has entered the city of Ninazu. She's been sent by her masters from Plane of Water to see into the deathly magic that's seeping through the portals that feed water into the desert city's aqueducts. If the source of contamination isn't stopped, the portals may be closed as a defense. Ahp was eager to volunteer to explore the other side, but she hadn't expected the Material Plane to so dry. So very, very dry.

Flagella is my first character to die in a very long time. Normally I'm the DM that kills other people's characters, so it's nice to be on the other side of things for a change. Flagella died a glorious, amazing death, so it ain't so bad. The cursed sword was a Berserking Sword, a sword that gives you rage and won't let you stop fighting until everything around you (enemy or ally) is dead. It wasn't that noticeable on Flagella, honestly, since she was already pretty keen to destroy all enemies and would often end up getting knocked out. After her death, the party kicked the sword down a bottomless pit. Randomly generated loot for the next unfortunate souls that explore the necropolis!

Ahp is actually the original character I wanted to play for this campaign (The Cerulean Throne) before deciding to go with Flagella. Going with fighter / bard for her. Originally she was inspired by Morphling of DOTA 2, and I wanted to make a water elemental character that whooshed about a lot. Her appearance is perhaps a bit too close to a certain Homeworld Gem from a certain cartoon a completely original design original character do not steal plz.
Posted by Blanca Martinez de Rituerto at 22:07 0 comments