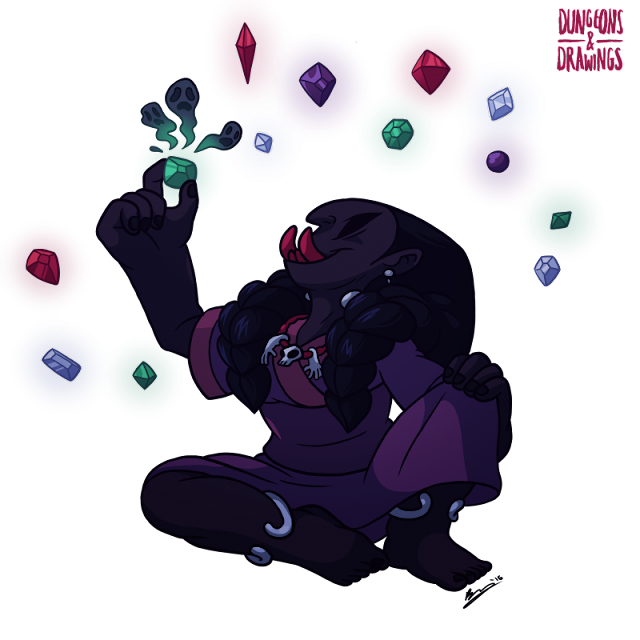 The shadow giant is the second most powerful of the true giants (the most powerful being the mountain giant). While these creatures are in possession of the strength common to their kind, the source of their power comes both from the uncanny way they just know how to kill and the close relationship they have with darkness. Shadow giants are assassins, the kind you may send to take out a dragon or demon with a death attack when the crash and bang of ordinary adventurers just won't do. These giants are also masters of shadow, being able to weave them into all sorts of creatures and weapon and dark imitations of incredibly powerful of spells. If a shadow giant can't kill you, it may imprison you in a gem for all eternity.

Honestly, when I read the entry for the shadow giant I found it a bit silly. A giant with a death attack? Seems a bit overkill when a single punch will probably kill smaller creatures. Sneak attack, weakness to light, so on. Let's see what the spell-like abilities are. Deeper darkness and blur are pretty okay, shadow walk fits with the theme. It's got shadow evocation and... shades? Wait, it has shades as an at-will ability? As in able to cast an 8th level or lower conjuration (summoning or creation) spell every turn for free? At will?

So it's that last bit that I think makes the shadow giant hardcore. Granted, shades may not work on those who realize that whatever spell it's copying isn't the actual real spell, but even then it has an 80% success rate.

So if I were a DM using a shadow giant I would just have it copy the trap the soul spell ad nauseum until the whole party is trapped in gems. Then I would make a tasteful necklace out of their trapped souls.
Posted by Blanca Martinez de Rituerto at 20:54