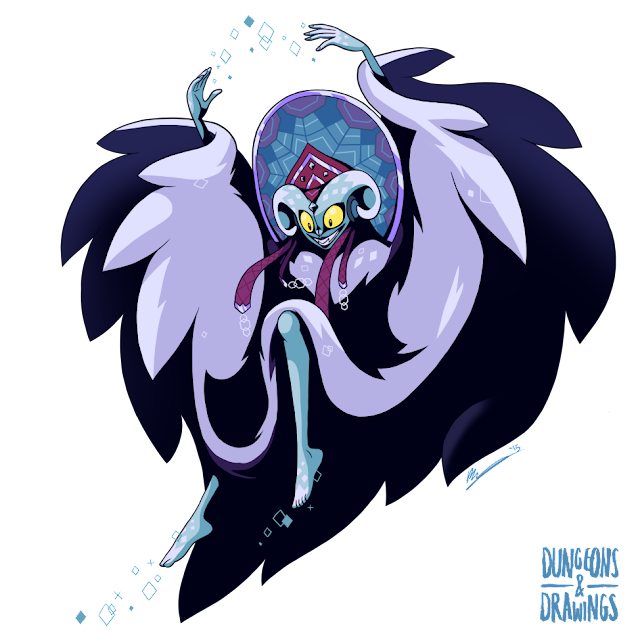 This year's Winter-themed creature and the last image of 2015.

The frostwind virago is one of those high-end fey that you really really don't want to run into. She is the anthropomorphic representation of the beauty, danger and caprice of winter. They live in cold mountains, though will travel is the cold weather permits it. Their favourite passtime is enthralling warm-blooded creatures to torture with their frost magic until the unfortunate victim freezes to death. Even those who aren't charmed by the virago's magic or are immune to the ice she summons, she can exert a strange mental torture on them. Those near enough to the virago feel their minds seize up and slow as if that is freezing over.

Ah, the return to the frosty woman. This is a theme I've visited a few times before, namely the snow weird and ice weird. For those images I focused pretty much entirely on snowflakes, frost and ice as my visual themes. And it's still present in the frostwind virago, but this time I permitted myself to look outside that for inspiration. The main inspiration behind this image is actually the snowy owl (Hedgewig, for those of you who remember Harry Potter). I went a little bit off script with the virago too. The description makes a big deal out of her having blue eyes, but she's already so blue and I wanted to give her yellow owl eyes. She also doesn't have horns, but I wanted her to be kind of a companion piece to the verdant prince.

Interesting etymology behind the word "virago". It's one of those words whose name has gotten twisted over time. It used to mean "strong-spirited woman", but now it means "loud-mouthed, stubborn bitch". Kinda like how the word "hussy" used to mean "good housewife who takes care of her man and her kids" became "filthy slut who wrecks marriages for fun". Funny how history finds a way to turn positive words into negative ones, isn't it.
Posted by Blanca Martinez de Rituerto at 23:09