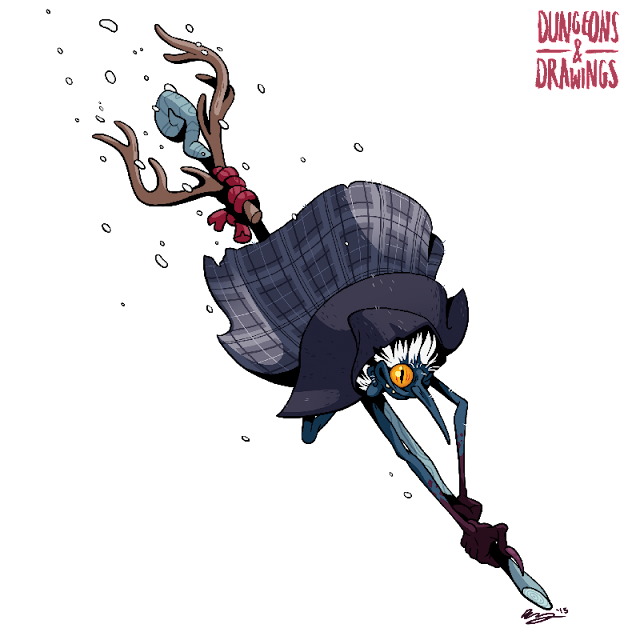 The bheur hag is a relative of the marzanna, another evil winter witch. At first the bheur seems the less physically imposing of the two, a little old lady leaning on a stick. Then it turns out that she's considerably more dangerous.

One illustration can't show the full scope of the bheur hag's dangerousness. For one, they can fly and are content to pelt their enemies from above with snow and ice. One of the spells she can cast whenever she pleases is Snilloc's snowball swarm (it's pretty much what you think it is). Her staff is the focus of her magical power, but she's not helpless without it, just magically weakened. If the hag decides that she must enter physical combat, she makes herself double in size. And when she defeats a victim, the bheur strips the flesh away from the bones so quickly that any unlucky observers and literally stuck blind with horror.

And I do mean literally. It's a Will save where if you fail you're either permanently blind or go insane for 2d6 days on a 75-25 chance ratio. Don't look at her when she's eating, is what I'm saying.

The bheur hag is another creature I've come across in some of my reading. In Otta Swire's Skye, the Island and its Legends she appears as the winter goddess/spirit Cailleach Bheur, partially responsible for the creation of the Cuillin Hills. She appears in some other Scottish and Irish folklore, but the Skye one's the only one I've read in a book. Like the aforementioned marzanna, she also has a little bit of a ritual attached to her. But instead of being destroyed in effigy, whoever is last to bring in the harvest has to house a Cailleach effigy for a year.
Posted by Blanca Martinez de Rituerto at 08:00