Happy Halloween! Brain in a Jar 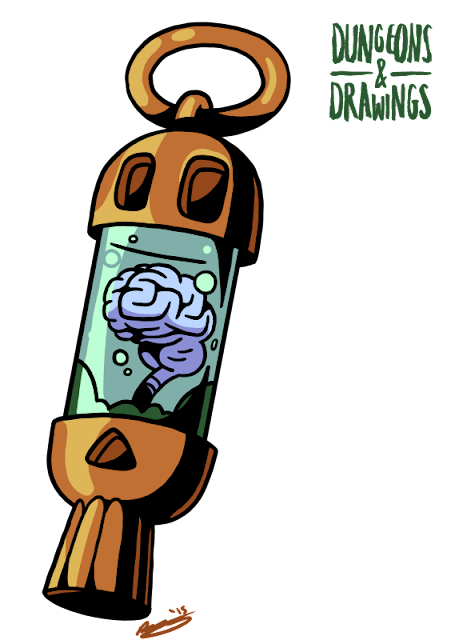 The brain in a jar is considered an undead creature. I guess the process that involves yanking a brain out of someone's noggin and sticking it in a goopy container will kill the brain at some point. Temporarily at least. The brain is a good deal more potent in the jar than in the head, since the alchemical whatsits gives it some psychic juju to mess around with. It can communicate telepathically, implant suggestions, squeeze minds and float itself and its container around. It isn't that happy about its situation though, and anybody who tries to read the brain's mind will share its madness (Wisdom drain, yo).

Honestly, I find the fact that it has a fly speed a little disappointing. I really dig the idea of this seemingly inanimate object hidden somewhere in the room that's dealing damage. Or what if you have a whole room filled with these fellas, all dealing 2d10 damage in one go. I think that sounds neat.

This seems like a considerably less powerful version of the elder brain and the demilich, to make things accessible to low-level characters.

My favourite "brain in a jar" story is a certain Lovecraft tale. Roald Dahl also wrote a short story ("William and Mary") with an extracted sentient brain that was also quite unpleasant.