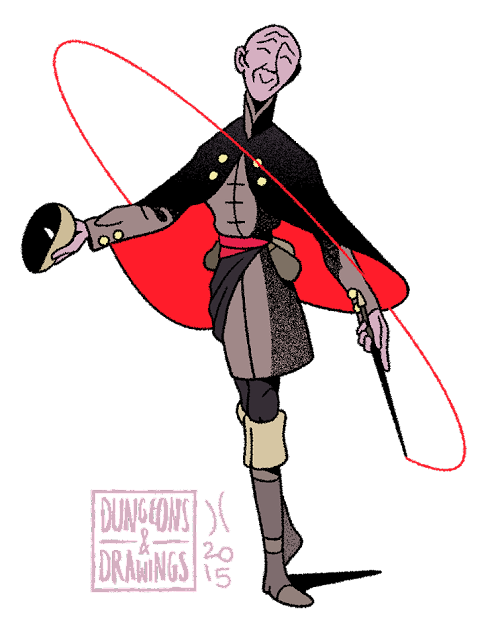 Victor Anselm is my current player character from our evil pathfinder campaign that my friend is running. Blanca's character Renata is in the same campaign - it's based around an assassin's guild (of which we're members) situated in the seedy streets of a (largely corrupt) city. Blanca's comparison to games like Dishonored is pretty accurate - we play assassins tasked with offing whichever individuals the guild is currently being paid to off. We've had around six or seven sessions now, and it's been quite fun! Each session takes the form of a self-contained "hit" and they've all been pretty varied in terms of structure and method.

It's a moderately high-level campaign for us - at this point Victor is a 6th-level Wizard with three levels in the Assassin prestige class (which is pretty much the same as its equivalent in 3.5). He's pretty fun - all his spells are themed around blood and vampirism, although he's not actually a vampire. He's more just supposed to be this person who seeks knowledge and power, both at the expense of his own health and of the people around him. He's supposed to have a bit of a Hannibal vibe, where he appears quite friendly but you always have this slight sense that he's orchestrating some elaborate death for you!

The campaign has been pretty wacky. After our (failed) first hit, we learned that banking your whole mission on a single d20 roll - whilst potentially very cool - can go pretty horribly wrong. As a result we've settled into a bit of a rhythm of coming up with methods that trade stealth for reliability. One memorable example was handing a letter covered in around 5 instances of Explosive Runes to a lady at a ball. Immediately afterwards we all run away, Wile-E.-Coyote-style, crouching behind a table and plugging our ears as the letter explodes, dealing something like 30d6 points of force damage to everyone within a 10-foot radius. There is a line where "assassination" crosses over into "terrorist act" and I think we are currently dancing an awful, awful dance along that line.

It's fun though! There's definitely a part of me that misses playing a Good Guy in an Epic Fantasy Story but I think messing around with what works within the context of tabletop RPGs is always worthwhile.
Posted by Joe Sparrow at 11:14