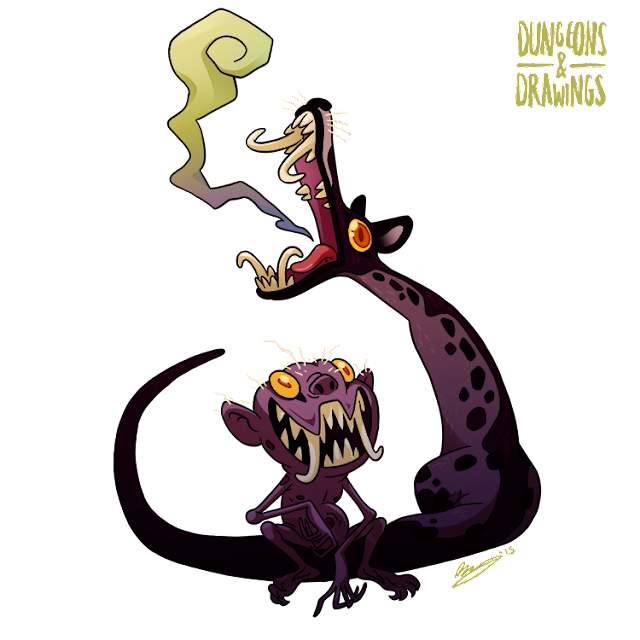 The Bajang is an evil forest spirit which looks like a tiny person. Then they turn into a jungle kitty. Then they poison you. Bad juju.

I did a bunch of research on this particular creature because stuff in Oriental Adventures tends to be inspired from actual creatures. I actually prefer that creature a bit more to the statted one. Doing the research was actually a bit tricky because a good amount of it seemed to directly reference D&D or were very short/misinformed, but I eventually found some stuff in Malay Magic by Richard Skeat and some other sources. So get ready for a history lesson y'all.

Bajangs are one of several Malaysian ghouls related to miscarriages and stillbirths. Bajangs are evil spirits found in dead male babies, usually risen by wizards and enslaved as familiar spirits. They are used to cause disease (epilepsy, hallucinations, etc) and are usually seen in the form of a polecat (called a musang). Now this last bit is where a good amount of misinformation starts, since a lot of my other sources seem to think polecat = regular wild cat of some sort when they're a bit closer to weasels. So while Malaysia does have a bunch of wild felines, the legend of the Bajang may have referred to a civet, called musang in South East Asian languages. But civets are weird big leopard-weasel things, so I can see why it's just easier to simplify it to jungle cat for Western audiences.

So I can see why there was a lot of shifting around with the folklore when it came to writing a D&D entry. When you're playing D&D you don't especially want to think about dead babies that want to eat other babies (and fetuses). But I don't see why they have to be classified as fey creatures rather than undead or outsiders. In my research I found maybe two references to them being jungle spirits (and even then those might just be Bajangs who were able to escape their masters). The Dryad-like tie to a tree is also something I wasn't able to confirm, though this may be a spin-off from Bajangs being trapped by their masters in bamboo tubes or chests.

Just make it an outsider that looks a bit like a baby. And that's also a were-civet. There you go.
Posted by Blanca Martinez de Rituerto at 13:07