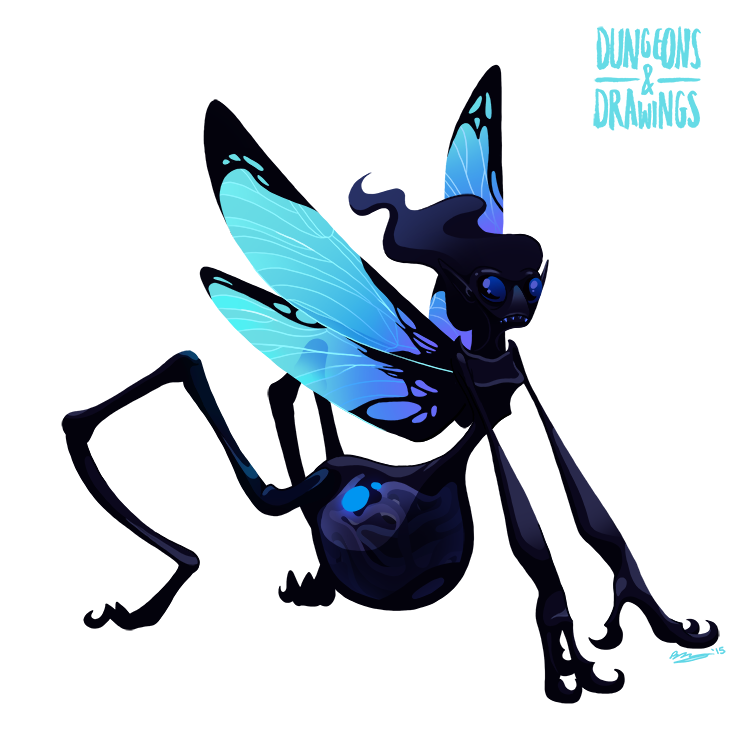 Shaedlings are to pixies what drow are to elves. When back when those elves who would become drow split away to follow Lolth the Queen of the Demonweb Pits, so did some pixies, and they too got "blessings" for their loyalty. Fey being closer to the primality of nature, Lolth's gifts are closer to her spidery nature.

A shaedling is much larger than a pixie, who never break the three-foot mark, and are almost as tall as humans when standing straight. Their stomachs are grotesquely distended and filled with silk made of shadow-stuff, called shadow gossamer. The gossamer are is drawn and quickly woven into a small object, normally a weapon or armour, which is of extreme lightness and masterful craftwork. These objects are inherently linked to the shaedling, and will dissolve after a few seconds upon being relinquished.

This was interesting to draw, though I found it a bit difficult to pose the shaedling in a way that was dynamic. It still isn't dynamic, but I like it more now than I did when I first started sketching it. I don't much care for drawing wings, despite how many of the things I've done have them (it is a standard fantasy trait). I did enjoy trying to figure out a way to draw the patterns on a dragonfly wing in a way that wouldn't overcomplicate the image.
Posted by Blanca Martinez de Rituerto at 15:07