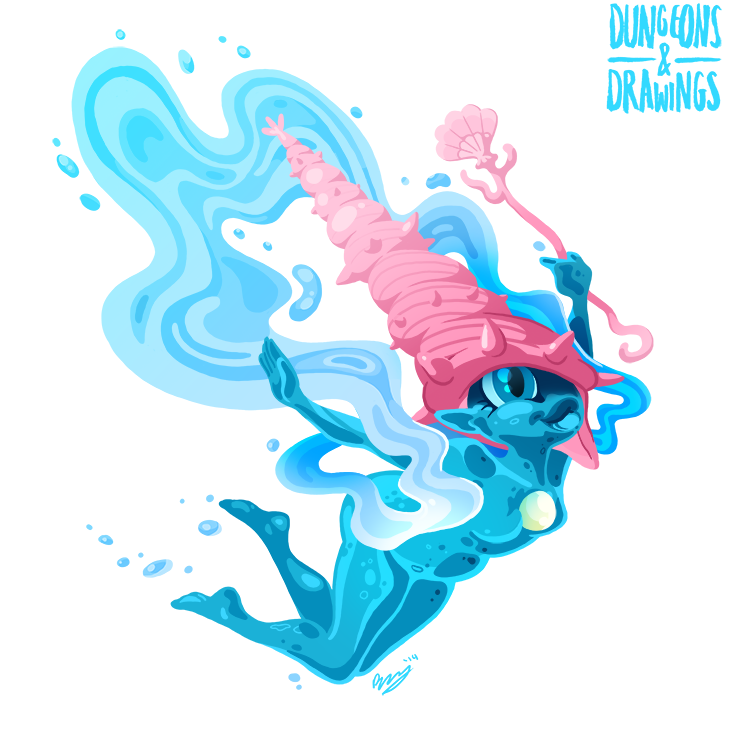 Nereids are sea nymphs, the ocean being their usual habitat when they're not in the Elemental Plane of Water, their true home. Much like Dryads, the tree nymphs, are bound to their tree to survive, the Nereid's life is bound to their shawl, a floating material made of surf. Being separated from their shawls for too long results in the death of the Nereid, so stealing one is a certain (if cruel) way to temporarily gain their allegiance.

But the Nereid is a shy creature with a host of defensive abilities. As water faeries from an Elemental Plane, their bodies seem to be made out of shimmering water, making them incredibly difficult to see when submerged. They can also control the water surrounding them, alter currents and summon Water Elementals to protect them. Her final defense is an especially nasty and last resort one. The Nereid can kill with a kiss, filling the lungs of the victim with water so that they drown. You shouldn't have tried to take her shawl.

Actually a creature from Greek myth, as many nymphy creatures tend to be. While the word dryad refers to how they are bound to oak trees (drys), their name actually means that they are daughters of Nereus (50 in total, plus the son Nerites), an ancient sea god. There's some confusion between them and the Oceanids, daughters of Oceanus who are also sea nymphs (3000 in total, along with 3000 brothers --Potamoi-- river spirits). Calypso, of The Odyssey fame, is a Nereid or an Oceanid  depending on the source. Regardless of parentage, sea nymphs tended to be minor protective spirits to fishermen, sailors and the like.
Posted by Blanca Martinez de Rituerto at 08:00