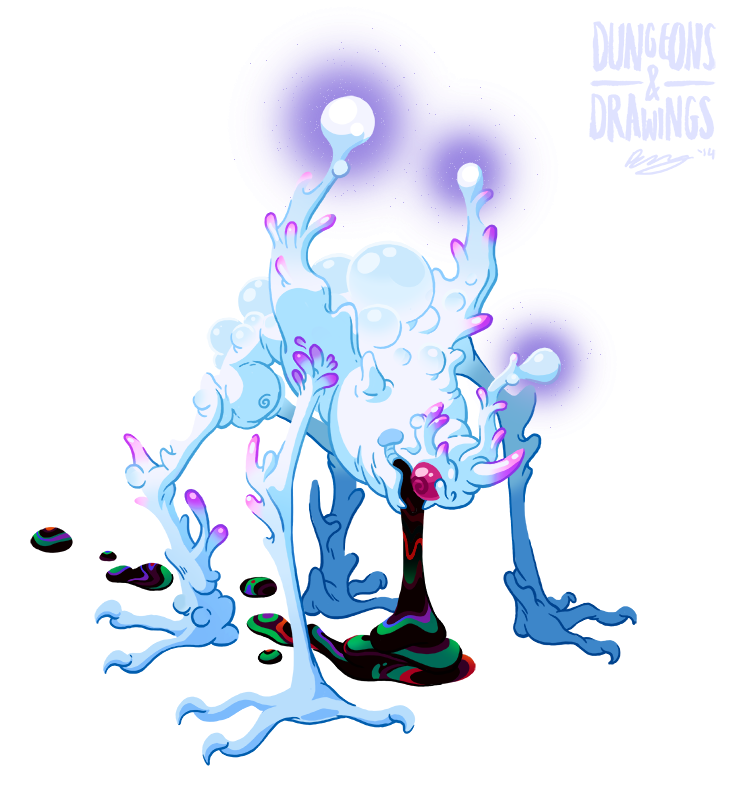 The Death Slaad isn't the final evolution of the slaad species. Neither is the White Slaad; it's merely the next step.

But first lets go over the many many steps needed to get to a white slaad. First a Blue or Red slaad needs to infect a spellcaster in order to create a Green Slaad. After a century, it becomes a Grey Slaad, and it can use a Ritual to become a Death Slaad. Then after yet another century, a Death Slaad becomes a White Slaad. And like I said, this isn't even it's final form.

But for now, the Slaad comes closer to the primordial chaos that originally birthed them as creatures. As well as having destructive chaos-themed magical abilities, the White Slaad is able to belch up chaotic goo which corrodes away the laws that hold matter together like acid. Even those who would normally have protection from chaos aren't a match for it, as it burns through the shielding magic.

I've kept going with the whole fungal thing that Joe did with his Death Slaad, since I was pretty disappointed with my original Green Slaad. The fungus thing adds a little something visually weird to what are otherwise yet another lizard/frog creature. The 3.0 edition of the Monster Manual actually had a nice table to slightly randomize the appearance and abilities of the Slaad. They still kept the basic giant toad-man thing, but you could sometimes get ones with snake hair, wings, petrification gaze, breath weapons or exploding poisonous boils.
Posted by Blanca Martinez de Rituerto at 12:25