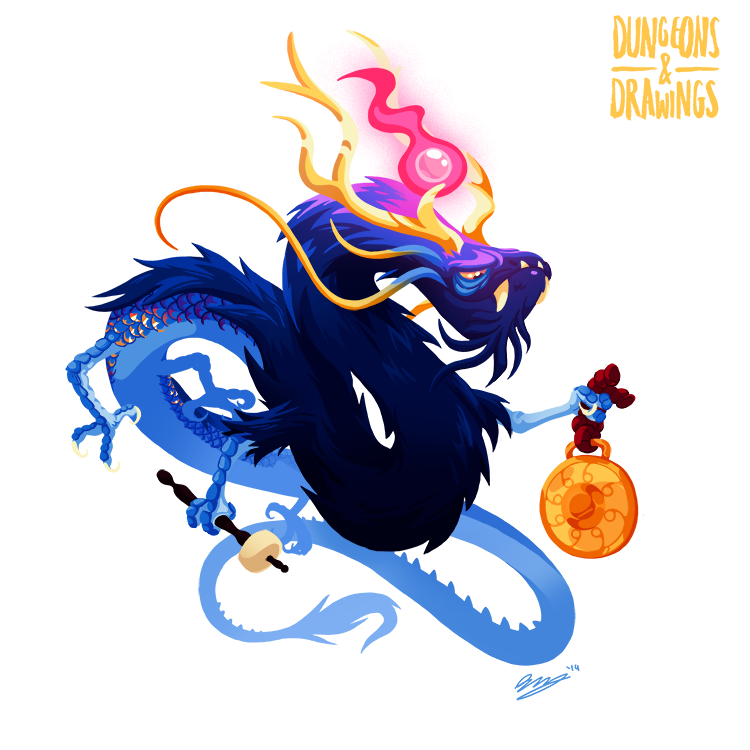 The Shen Lung is one of many different dragons of the Lung type. Ordinary dragons are highly magical creatures, but in the end they are merely intelligent, large and potent beasts. The Lungs are inherently mystical beings allied to the elements who cross the boundary between the Spirit World and the Material Plane at will. Their powers come from a mystic pearl embedded in their heads (or brains), which allow them to fly without wings, riding the currents of air.

The Shen Lung (the Spirit Dragon) is among the lungs that mortals are most likely to meet, where all others prefer to remain hidden away in their celestial palaces or in the Spirit World. An aura of divine purity exudes from this dragon, repelling all verminous beasts that would dare approach it. It has special power over water and is often found near rivers inhabited by Chiang Lungs, whom they are bodyguards to. Pleasing a Shen Lung results in good harvests, while insulting one can lead to floods and blights, as it has control over the weather.

I like the traditional D&D dragons (blue and black are my favourites), but I have a soft spot in my heart for the lung type dragons. I think it's mostly the way they don't have wings but can still fly. There's just something quite cool about that. And the whole mystic pearl thing. Some Chinese (and I'm assuming other Oriental tales) feature the dragon's pearl being found by a human and then it bringing them good luck.

Some of you may recognize the name Shen Lung from the Dragon Ball series, where the 7 dragon balls (mystic pearls?) were gathered together to summon Shenron (or Eternal Dragon, or Shenlong) to grant the gatherer a wish.

The final image of Epic Month, which also consisted of the Phoenix, Phane and White Slaad. Using a dragon feels a bit like cheating, since dragons have more than one challenge rating depending on their age. But from 800 years onwards a Shen Lung is over CR 20 so that means it becomes an epic level creature so yeah.
Posted by Blanca Martinez de Rituerto at 08:00