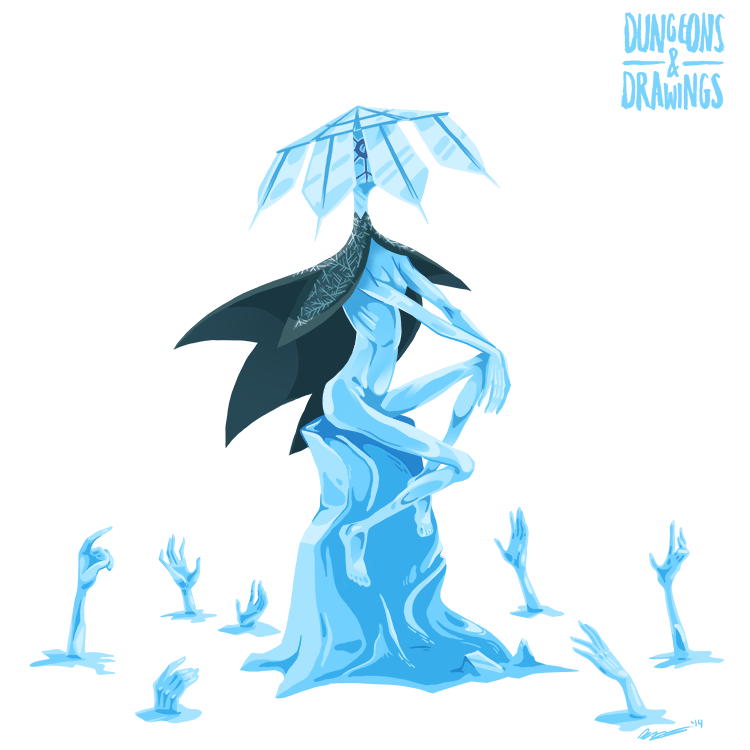 The Ice Weird is the more solid version of the Snow Weird, water-influencing rather than air-influencing. Like other Weirds, she's an especially powerful elemental tied to the mortal world by an elemental pool, a roiling mass of ice, which she cannot leave except to return to the Elemental Plane of Water, closing the pool behind her. Unlike the Snow Weird, she is unable to control the weather, her powers being more directed towards physical and mental handicapping.

Trying to make the Ice Weird sufficiently similar from the Snow Weird was a pretty tricky challenge, especially since there were aspects with the first drawing that I was happy with, but didn't want to repeat too much in the second one. Also there were a couple of visual tropes related to snow women that I wanted to avoid, namely the icicle / snowflake crown and white hair. Also, despite the fact that she and all weirds are supposed to resemble human women, I wanted there to be something somewhat inhuman about her. Whether I was successful or not is up to the viewer, but I'm fairly pleased with the results.
Posted by Blanca Martinez de Rituerto at 16:53