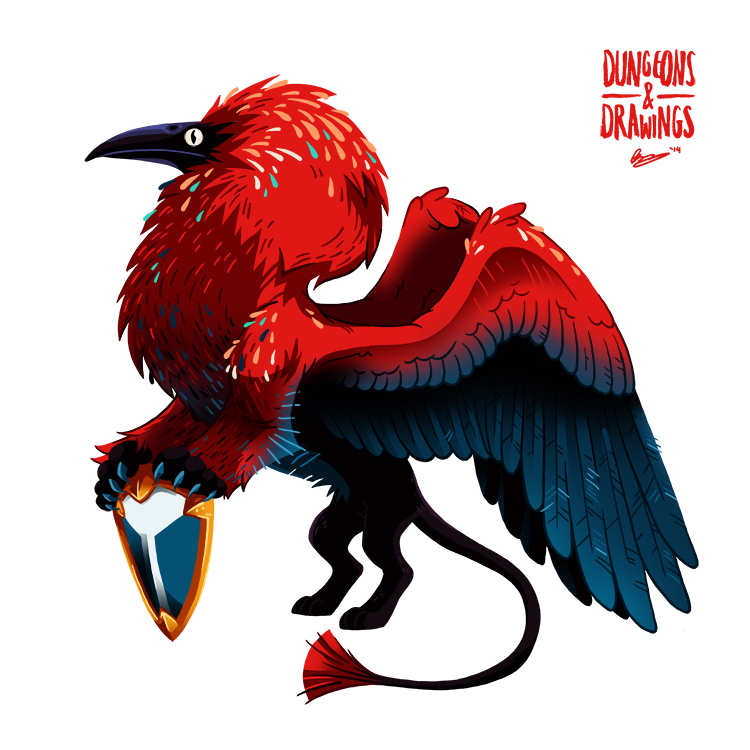 The Griffon, along with the dragon and the unicorn, is among the most recognized of the world's magical beasts. Being a combination of lion and eagle, two very admired mundane animals, ownership of a Griffin mount or guard beast is seen as a great status symbol in the nobility. However, due to the Griffin's horse-like size, along with its ferocity and not-quite-bestial intelligence, mean that it makes for a very dangerous and unpredictable pet. It's possible to train a Griffon, but this takes a long time and must be started when the beast is freshly hatched.

Sometimes, despite my best efforts, I end up feeling like I struggle with successfully making images sufficiently different. I know artists have their own styles, with recurring motifs, colour palettes, shapes, what have you, but at the same time you don't want it to feel like you're just drawing the same thing over and over again. This one, for example, I found difficult to make different from my gynosphinx, another red leonine creature.

Inspiration for the griffon, rather than eagles, was actually vultures, since their feather ruffs actually make good parellels to lion manes. I specifically looked at the bearded vulture and Egyptian vulture, which are a bit more regal looking than the average vulture. Even if the Egyptian dude does look a little bit dead.
Posted by Blanca Martinez de Rituerto at 12:27