Serpentflesh is actually a bit of a misnomer when it comes to this particular type of golem; it isn't made exclusively from snakes. Rather, the serpentflesh golem is actually made up of any body part that belonged to any of the serpent reptilian races, which can include kobolds, lizardmen, yuan-ti, nagas, and similar races.

Essentially, a serpentflesh golem is almost exactly like the ordinary flesh golem (i.e. the Frankenstein's monster): it's a mindless construct immune to many forms of magic, save for those that deal certain elemental magic. However, due to the serpentflesh golem's inherent bodyparts, it's also venomouse, capable of delivering poison through any snake-headed section of its body.

The serpentflesh golem is meant as an insult to the scaled races. Most of the scaly ones are too proud to create abominations from their own flesh, and seeing the non-scaled races create these abominations makes their cold blood boil. 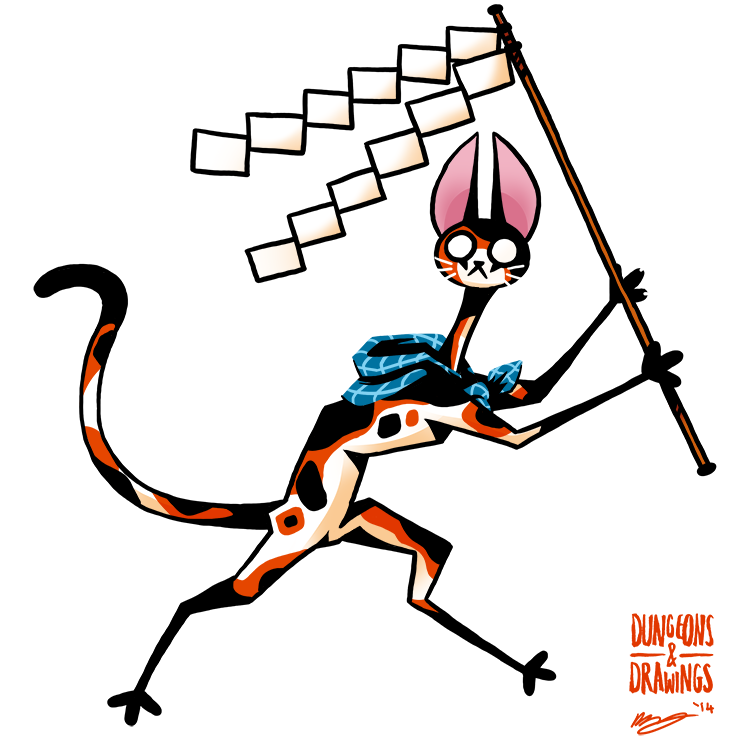 Hengeyokai are more a varied creature type than a true race. Some animals already have inherent ties to mysticism and are used as familiars or sacrifices. These same animals can find their innate magical ability growing to the point that when they reach a certain age --usually 100 years-- the animal undergoes a sudden magical burst. It gains true sentience, becoming about as intelligent as a man, as well as shapeshifting abilities, having three main forms: an animal form, a human form, and a hybrid form which looks like the animal walking on its hind legs. In fact, hengeyokai translates to "changing monster".

While a good amount of hengeyokai can pass for ordinary animals, become slightly malformed by their transformation, usually gaining an extra tail. Even when shapeshifted, the animal's true nature may be exposed by a body part that won't transform (again, usually the tail), vaguely bestial features, or markings remeniscent of their true form. The hengeyokai may also be exposed by their appetites -- many a cat hengeyokai is exposed by being caught eating dead birds while in human form.

The hengeyokai are primarily tricksters, using their abilities to steal or cause minor inconvenience to surrounding human populations. Especially malevolent hengeyokai will take on the form of a person in a household, murder them, and take their place. Animals prone to transforming are foxes (kitsune), racoon dogs (tanuki), cats (bakeneko), badgers (mujina) and dogs (inugami).
Posted by Blanca Martinez de Rituerto at 11:44 0 comments