So, as I'm DMing a Pathfinder game right now I thought I'd make a little post of some of the material I made for the players. This is all based on the official Pathfinder campaign module Fangwood Keep, which I bought at the Orc's Nest in London a few weeks ago after reading a bunch of positive reviews for it online.

The campaign as written is a pretty simple affair designed to be a standalone, one or two session deal. I'm padding it out a bit, although we tend to go through stuff pretty slowly so I imagine it'll be around 3 or 4 sessions to finish. The story involves a pair of warring nations, Nirmathas and Molthune, and a disputed fort on their border, the eponymous Fangwood Keep. The way I'm fluffing it is that the two countries have achieved an uneasy peace, and as part of the treaty the tactically crucial Keep must be kept vacant by both sides. 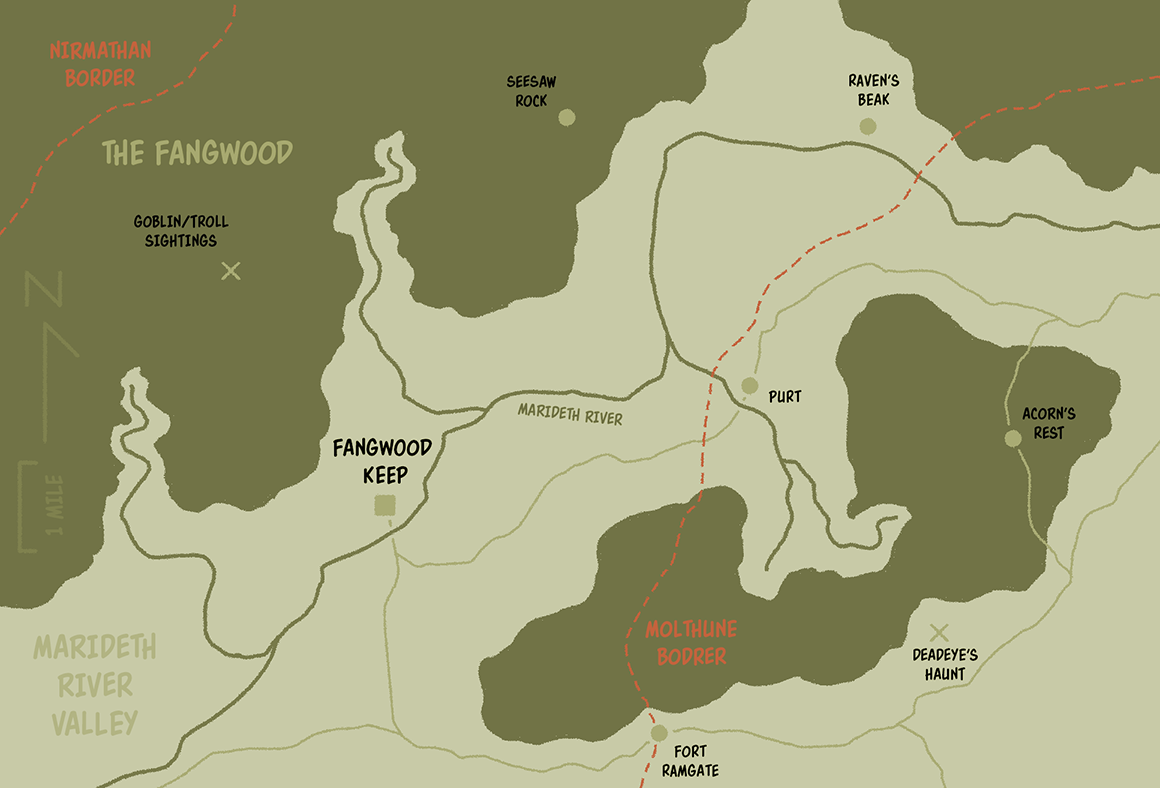 This treaty is threatened when a rebellious Molthune captain named Pavo Vos disobeys orders and takes the keep by force, helped by the elite specialist infantry unit he once commanded in the army, known as "Vos' Vipers". The main thing I added here was Vos' three liutenants - pictured with him below - because when I read the description of his squad I was disappointed to learn that, despite the unit's description as a group of "specialist" soldiers excelling in espionage and covert military operations, there was remarkably little characterisation.

So, I added three underlings for Vos (replacing some other NPCs in the quest so the XP doesn't get knocked out too much), with the intention of fluffing them as a sort of rival NPC party for the players to duke it out with. They're highly specialised for different roles in combat, and each have a fair share of weird abilities and tricks that (hopefully, we haven't quite started the campaign yet) will keep the players guessing. I suppose a big influence of the flavour of this setup would be the Metal Gear Solid series of games - whose colourful cast of villains have always been favourites of mine. 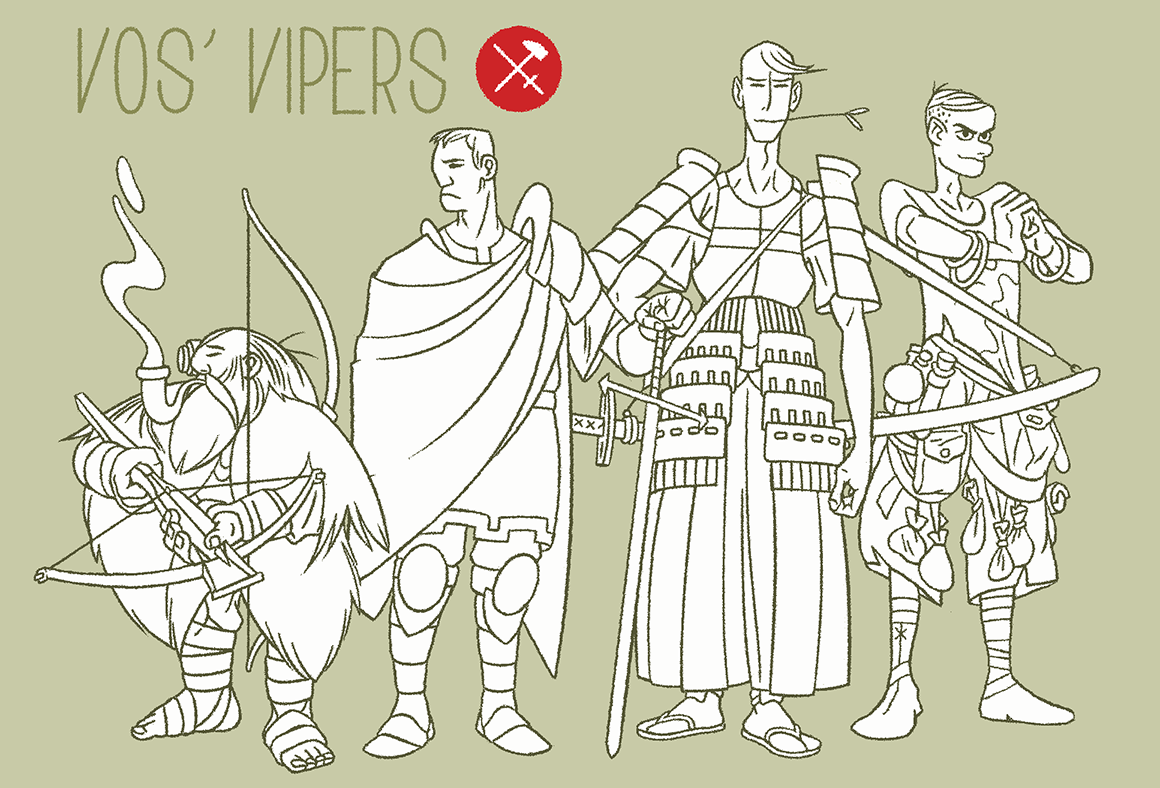 I'll just post some quick descriptions for you guys, as it's possible the players might look at the blog and I don't want them to get spoiled!

From left to right:

A dwarvish marksman. Softly spoken, something of a perfectionist. Not keen on direct combat, prefers guerilla tactics and stealth. Fond of traps, be careful!

Unit captain and the leader of the insurrection. Highly charismatic and a master tactician, he orchestrated countless successful operations during the war. No slouch with a blade, either - particularly with two or three men at his back. His motives in the insurrection are unclear. Has been sighted accompanied by a robed, dark-haired woman of unknown identity.

Little is known of this mysterious half-orc (yep, he's a half-orc) swordsman. An unparalelled duelist. Has a kind-hearted reputation despite his skill in combat.

Fleisch is the unit's demolitions expert. Bloodthirsty and quick-tempered by all accounts, and apparently an enthusiastic pugilist to boot.


The gist of the game is that you have this fortified Keep, which the party has to infiltrate, with Vos inside. The PCs have to get in, neutralise him, and get out. The entire keep is mapped out with set things in every room - it's largely up to the PCs to decide how they want to approach the problem. Scale the walls? Find a secret passage? Stealth vs. kick-down-the-door-guns-blazing? It's an idea that appeals to me, kind of blending your standard dungeon crawler with something a bit more sandboxy. It's by no means all combat, either - there are definitely opportunities to talk your way in or out of things.

I'm also using a computer to keep track of everything - I'm making a gigantic, layered map in a program called Adobe Flash (which we use for animating all the time) and it's quite easy for me to set up a big document containing everything - rooms, items, enemy locations - it even has a day/night cycle! it looks cool, too. 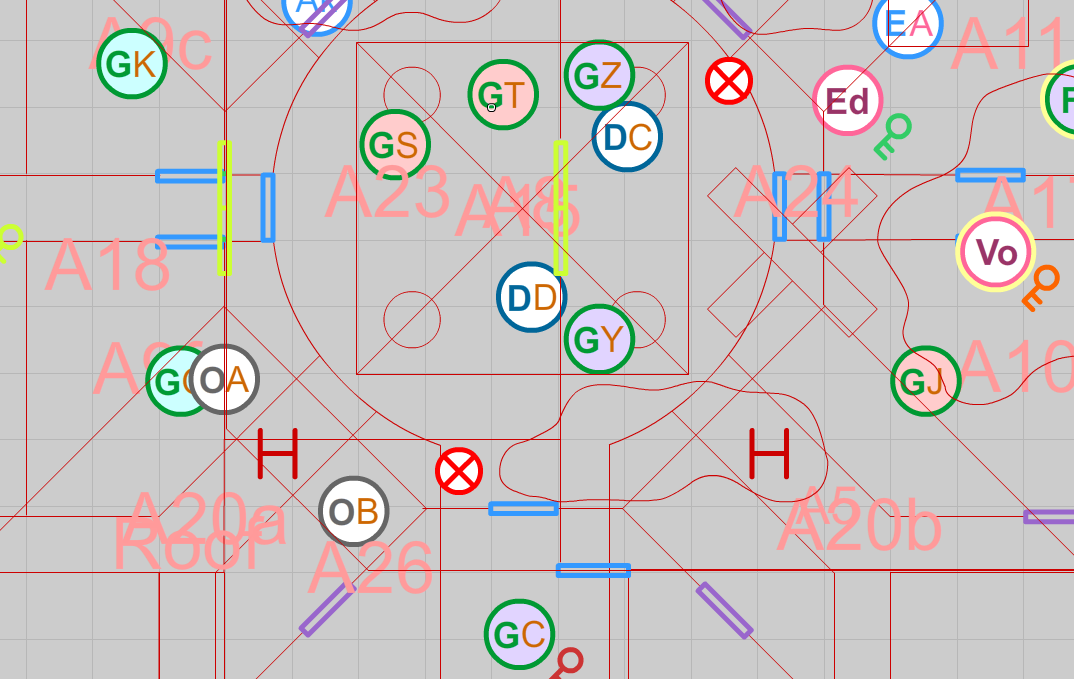 I won't reveal any more now, but we're playing the first session next weekend. In subsequent posts I'll let you know how people are getting on, and hopefully post pictures! I kinda hope I kill at least one person :3

Let me know in the comments if you've played this campaign, too. Or if you have any funny DMing experiences - I'm completely new to this, and slightly nervous, so it all helps!