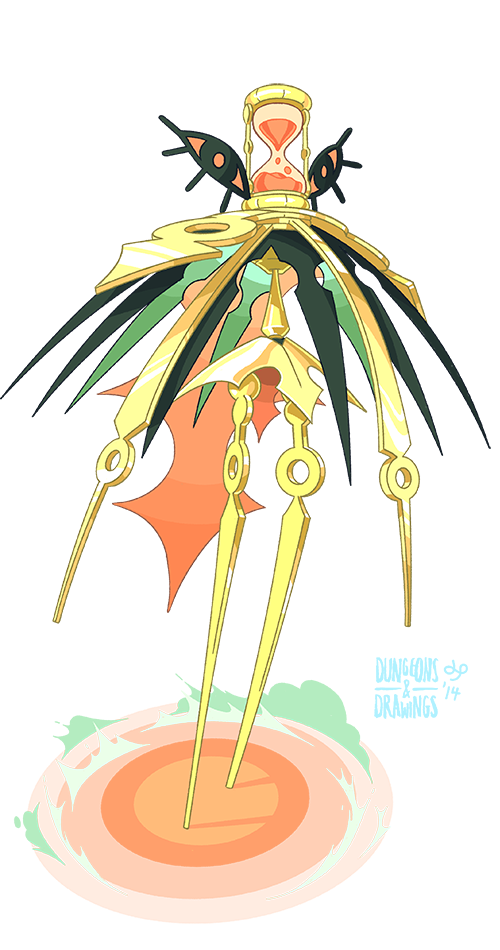 Some rare spells are of such power that they are legendary among spellcasters - spells that have the potential to alter the very structure of the universe, such as the infamous Wish.

Quaruts are Inevitables - mechanised beings from the lawful plane of Mechanus which are tasked with the upholding of natural order - and are among the most powerful even of these. Within their custody lie all such magicks that might meddle with space and time - their objective is to hunt down such spellcasters that use them and restore a relative balance to the universe.

Quaruts are some heavy stuff, clocking in at CR 17 - meaning you're getting close to epic level in order to take them on. And with good reason - despite their desire to eradicate all manipulators of space and time, they themselves have no qualms about chucking about spell-like-abilities like Time Stop and Limited Wish. The former allows it to literally stop time locally for a few turns (giving it ample room to imprison you safely in a pocket dimension) and the latter allows it access to literally any spell of up to 6th caster level. The lesson here is: don't mess with spacetime, kids!

We always like to put up holiday-themed monsters, but some of them are pretty hard to figure out an appropriate creature for. Blanca made a big list of potential "New Yearsy" beasts, and then we picked two that we liked and did those. I haven't drawn an Inevitable in ages, which is surprising because I really like 'em. The clock motifs in this one are a little hammy and I nicked the eyes from Sahaquiel of Evangelion and Senketsu from Kill La Kill. Man, I enjoy Kill La Kill! Literal guilty pleasure but there are very few animes around with such artistic class to them (outside of the boob's 'n' butts).

Also this being almost two weeks into the new year is my fault.
Posted by Joe Sparrow at 19:55