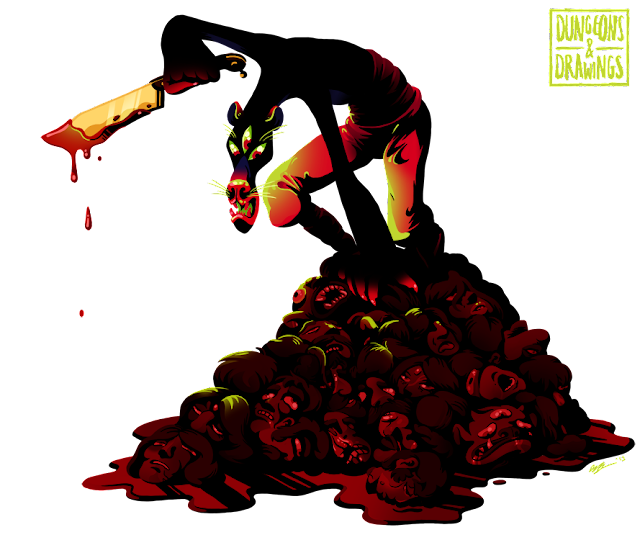 While the standard rakshasa is a pretty formidable spellcaster, the Nazathurne rakshasa is a whole different story. It has no spells of its own, but isn't completely devoid of magical ability. Instead, this rakshasa can meld with the shadows and travel through them. Its lack of arcane knowledge is replaced with physical knowledge, which it uses to inflict devastating damage.

D&D has a few different rakshasas. The standard ones are pretty cool and Anthony S. Water's illustration for the 3.5 rakshasa is probably my favourite illustration in the Monster Manual, if not all of D&D illustrations. Other books added further rakshasas with more specific themes. Instead of being a sorcerer like the standard, the nazathurne is a rogue/shadowdancer.

The rakshasas are a set of demons from Indian mythology. Actually, they're more the Indian equivalent to the Japanese oni than European demons. Since both Hindu and Buddhism believe in reincarnation, sometimes rakshasa are the transformed or reincarnated form of a wicked person. The whole tiger-headed thing, though present is South Asian art, is exaggerated a bit by D&D. In mythology, a rakshasa can have the head of different animals or deformed features. Especially strong ones have multiple heads and limbs.

Book suggestionn du jour is The Ultimate Ilustrated Guide to Knives, Swords, Daggers & Blades by Harvey JS Withers and Tobias Capwell. It's a two volume collection filled with images of edged weapons (some polearms, not that many) that's a good resource and fairly compact. It's pretty Euro-centric, but there's still a decent amount of space dedicated to the swords and knives of Africa and Asia. The knife that the rakshasa is wielding in the image is an Indian pichangatti. 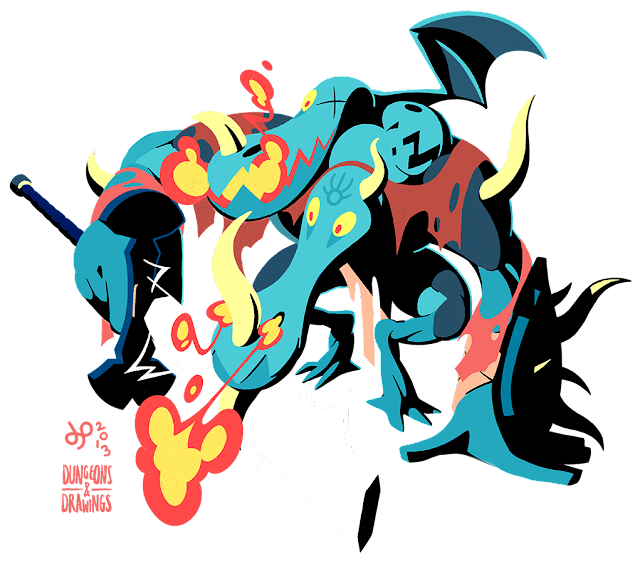 The blasphemous children of the dark goddess Tiamat are more in number and form than man can count. The true chromatic dragons (Red, Blue, White, Green and Black) make up only a portion of their ranks - the rest are lesser monsters, dwarf hybrids of creatures horribly twisted by Tiamat's unholy power.

The godslayers are some of the most feared of these. Mutated from the stock of blue dragons into hideous bipeds, they dedicate their lives to the slaughter of Tiamat's enemies. Godslayers take a barbaric delight in the use of melee weapons, which become charged with electricity by their innate draconic energies. Typically godslayers guard the lairs of venerable blue dragons, but are sometimes encountered abroad, roaming for good metallic dragons to torture and kill.

I tried out a more stark shading on this one, because I couldn't get anything more subtle to look right. It's not something I do too much if I can because it feels like a bit of a cop-out but there are some animations I love like Redline that make it work really nicely.

I tried to really push the "mutant" angle here, which is the one element that I like about dragonspawn - mostly they feel kind of mary-sueish (it's part dragon, part spider, part rhinoceros! super strong, no weaknesses! original character, do not steal!) and also they quite often look a bit silly. So I thought, well, the influence of an evil deity like Tiamat isn't going to produce some perfect man-dragon specimen - it's going to be this weird hybrid creature, something like the pasty human-alien thing in Alien: Resurrection, albeit insanely strong and tough. So I've given the guy two heads (two and a half if you count the little half-formed head poking out in the top right) and a little vestigial wing that isn't going to be flying anyone anywhere.

Alert readers will note that bluespawn godslayers do not, in fact, have a breath weapon but I thought the fire looked cool in the composition. And yay, we're back to no backgrounds again! Lazy art is best art.