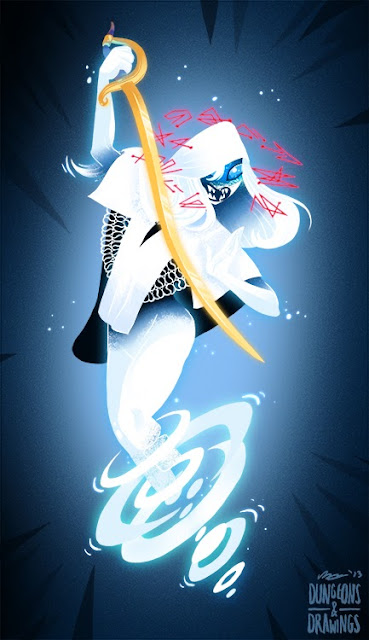 The Sybillic Guaridan is a psychic archon, being allies (and occasionally summoned servants) of psionic heroes. Like other archons, they dwell in Celestia, training in the arts of battle to do war with the infernal and abyssal hordes. However, these particular archons and other psionic creatures believe that a different war is coming, though magical divination can't actually confirm this. Perhaps their war will be one with the creatures of the Far Realm, or whatever horrifying races live beyond that.

You know what I always find difficult? Any aspect of graphic design. I'm fine with illustration, laying an image, character design, colour... But when it comes to setting up fonts and similar bits of text, it really gives me a headache. This also applies to things like runes and glyphs, since they're an infuriating combination of illustration and graphic design. It'd difficult to make magical writing look legit.

But I think I finally hit on something, since I'm actually fairly happy with the glyphs in this image, which I generated using a magic square. Each glyph means something, so if anybody wants to figure out what they mean, look to Saturn.
Posted by Blanca Martinez de Rituerto at 12:08