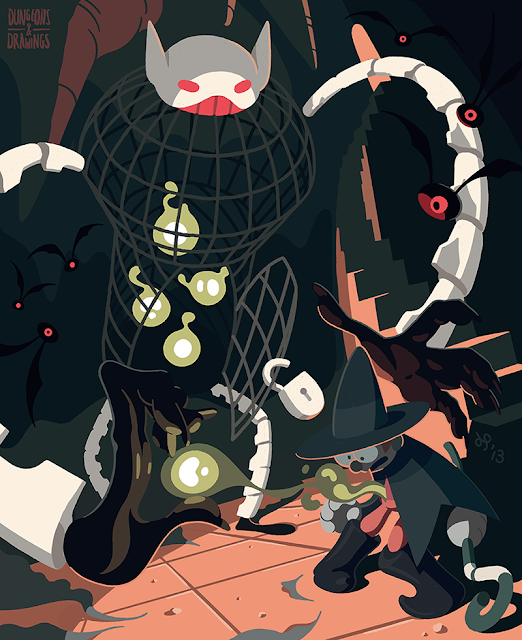 It's a longstanding tradition here at Dungeons & Drawings that anything with the name "Month" in the title typically takes 2 - 3 x longer than a month. A record which remains unbroken! This time the delay is almost entirely my fault (usual moans of work PLUS A CERTAIN SPECIAL SOMETHING WE'LL BE ABLE TO ANNOUNCE SOON). Plus, you know, Pokemon, I guess? Message me on twitter (@torpordust) if you wanna exchange friend codes or something.

Anyway, for our final pair of pics we've reduxed the hell out of each other's least favourite images. I love what Blanca did with the Sphinx, so I had a go at taking the Devourer (one of my favourite undead creatures) and running with the design pretty far from the D&D original. He's pretty different, almost like a construct, with a big birdcage torso housing the harvested essences of his victims (although I really like the creature's "undeath" angle so I tried to keep that feel with the skeletal arms/legs). The victim of his soul-stealing is my wizard character Ovid, who I actually did another picture of over here which I like a bit more than this picture.

I'm trying to push my approach a bit in complexity, this time including a background with several light sources and a sort of twisted perspective + poses. I'm not too pleased with the result, as I think it comes across as busy, but it was a lot of work so I guess having it done is sort of satisfying. Anyway, to hell with it! It's posted. Here endeth Redux Month.

As always, I want to say thanks to everyone for hanging around for our three years of blogging monster redesigns. It seriously means a lot to both of us. Doing Redux Month has really hammered home the ways we've developed artistically through doing the blog and engaging with people like y'all, it's really heartening. So thankyou! Seriously!

Also, we'll be at the following conventions in England over the next couple of months. Come say hello! 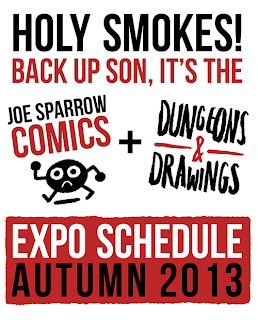 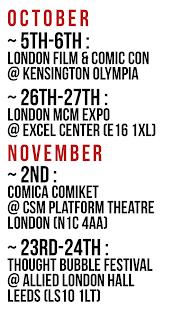