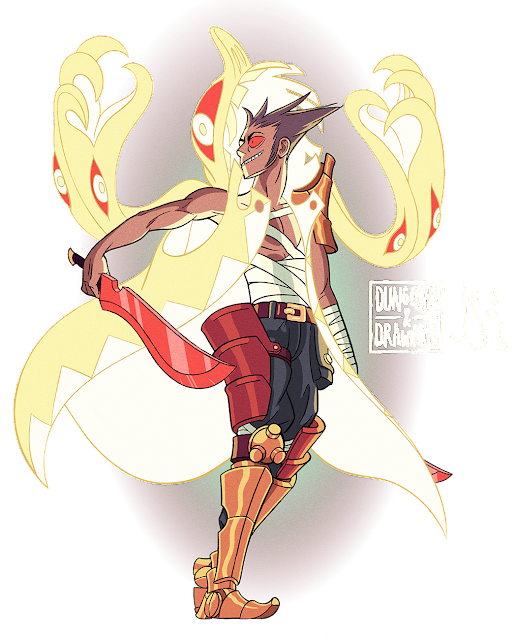 "Glimmerskin" is the name given to peculiar entities known, on occasion, to venture to our plane from that of positive energy. Little is known of their origin or behaviour, except that they seem inexplicably drawn to sites of conflict and violence on the material plane. Being incorporeal and thus unable to participate in the destruction they crave, they have been known to conduct semi-formal symbiotic "bondings" with earthly creatures (typically warmongers, or those who experience violence on a daily basis).

When thus contracted, the Glimmerskin encapsulates the "host" in a veil of light, often taking the appearance of a glowing cloak, or a radiant set of armor. The bond is willingly made - in exchange for sating the creature's appetite for blood, the host is bestowed with a portion of the Glimmerskin's magical positive energy - empowering his attacks and bolstering his defence. The Glimmerskin itself exerts no control over its partner, merely communicating its wishes telepathically; after all, it is more than capable of "jumping" to another host if the current one isn't fulfilling his duty!

The idea of Glimmerskins is pretty terrifying, particularly as they exist to further empower the already strong and bloody. I can imagine the presence of just one in any situation would be enough to shake things up considerably - people might try and outdo each other in acts of wanton violence in order to tempt it from owner to owner! It was fun to think of a symbiotic creature that goes in a different, light-themed direction from creatures like Venom. I'm quite happy with the design, although the host ended up going in a sort of Final Fantasy direction, which was... unexpected? I guess it reminds me a little of the centaur I did.

Anyway! This week marks the 3rd consecutive Sunday I've posted an image up ON TIME. WHOA! I even have a buffer. Aren't you guys proud of me?!