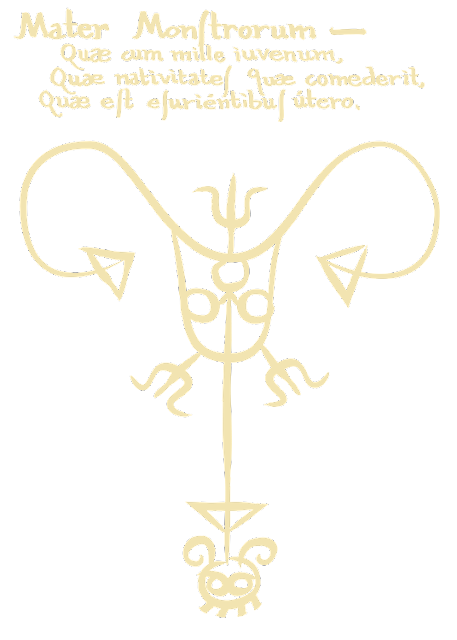 This was a blind challenge given to me by Joe.

I'd like to say challenge failed. It was bound to happen.

Which is a shame because this creature has a couple of interesting things going for it. It's essentially a big fat body with three tentacles, three claws and three open eyes (an undisclosed number of them being closed). So far, so aberrationy. But the interesting this about this particular monster is that its capable of creating a copy of any creature that it eats. This creature is completely loyal to it. Its lair is riddled with these monsters.

Which means that it's a good way for a DM to steal someone's character. Oh dang, you got eaten by this monster. Oh wait, your character's back, but he's my character now too bad.

The image that I've made is supposed to be inspired by two things: the female reproductive system and the Key of Solomon, a book about demon summoning accompanied by lots of really nice sigils. The first part is an idea I was proud of coming up with, but disappointed I couldn't rended it as well as I could. The monster is pretty much this bizarre sentient devouring womb. But I couldn't make that into an illustration I could be happy with so I copped out and went for something simpler instead.

The Latin was fun, though.