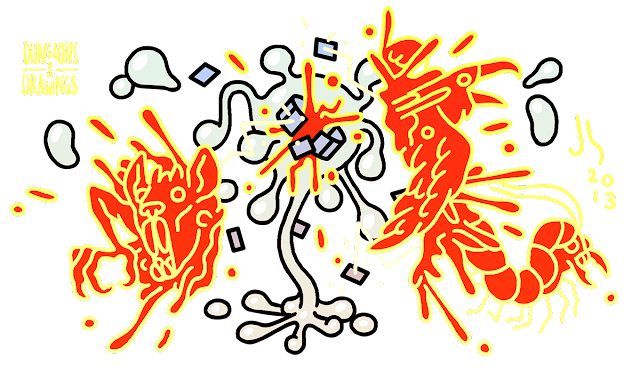 Common Oozes are difficult enough creatures to fight; alien in form and movement, often with a host of  more unpleasant qualities to substitute for the effectiveness of teeth and claws - with the Summoning Ooze the problem is compounded somewhat.

Possibly the result of a summoning spell physically manifesting, a Summoning Ooze is a gelatinous mass threaded through with glyphs of calling and binding which swim in chaotic patterns, summoning random creatures which materialise to serve the creature's bidding.

I feel a bit tired of digital painting so here's something a little more on the "graphic" end of the spectrum again. I got a little way into animating this guy (I love animating abstract blobby shapes swirling around) but I thought for the sake of speed for now I'll just post the image. Oozes are, as always, tricky to give some character to - for this guy I went for a weird anemone-style shape, like a many-armed head on a stalk (even if it's obscured a bit by all the stuff going on around it). Make sense to you guys?