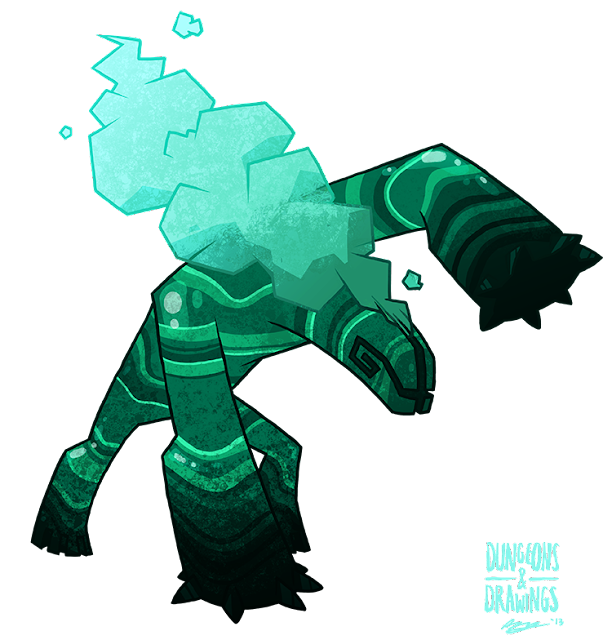 Though perhaps the more adequate term for this particular example would be the large malachite elemental.

Though it's understandable why an earth elemental is normally drawn by making them either made out of soil or grey stone, it's a bit of a shame to ignore all the beautiful different kinds of 'earth' there are in the world.  Malachite is probably my favourite stone just because of it's amazing natural floral green patterns. There are a number of other stones in the world that come in really stunning colours and shapes, before even being touched by man. I have to admit that this looks maybe a bit too much like a water elemental in its colours to properly communicate the earthiness of it, though. Though it would be nice to see a caste system with earth elementals. Maybe especially powerful or ancient elementals are made out of pure diamond?

Earth elementals are probably another creature where you can be quite cruel to your players with. How? Because as an earth elemental it can burrow effortlessly --and sightlessly-- though earth and stone. Bam! The ground you're standing on suddenly has arms.

This is the final of the pure elemental four. Perhaps in the future we'll tackle the paraelementals (lava, lightning, etc)? Probably.
Posted by Blanca Martinez de Rituerto at 00:13