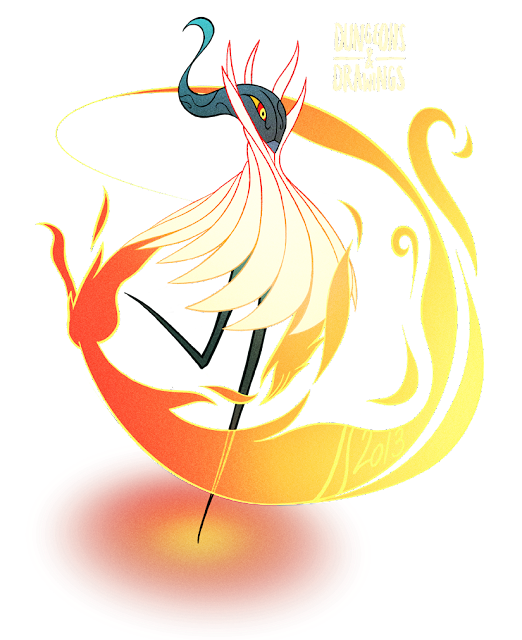 Broadly speaking, "Elemental" is a description that encompasses a range of monsters that are not so much living creatures as manifested forces of nature. These creatures are often almost mindless, or motivated by thoughts so primordial that their actions seem as such. While elementals are as diverse in type as the wide range of forces that give rise to them, perhaps the "classic" four elementals are the best known - Fire, Water, Earth and Air.

Fire Elementals are fearsome creatures of great speed and power, though flighty and erratic by nature. Their bodies burn with perpetual fire, giving their attacks extra damage and punishing adventurers that attack them with natural weapons. Your party monk is probably gonna have a bad time unless he has asbestos hands.

I really want to get back into using lines more! I enjoy actually drawing as opposed to just filling in blocks of colour sometimes. This guy might look a little unlike what you have in your head when you think of an Elemental, but I'm not that big a fan of the usual illustrations of big walking blobs of fire you usually get. I actually really like the elemental type works in MtG, where they appear a bit more like normal (yet weird) creatures, especially in the Lorwyn sets (like this guy, or this guy). You still get the impression they represent primal elemental forces but it's a bit more interesting than "a big buy made of fire/rock/air/water". Plus, you get colours in flame other than red and yellow!

The inspiration for the design is kind of a mix of Flare Dancers from Ocarina of Time and the Susanoo giant-ghost-mecha-things from Naruto. Yes, I still read Naruto. Don't judge me.