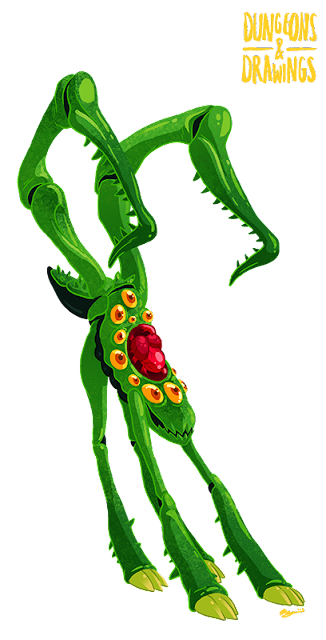 Nashrou are among the many animalian predators that are scattered about the Abyss. Their intelligence is comparable to wolves, as are their pack hierarchy. They're rarely alone, but a solitary nashrou could be a good or bad thing. Good may mean that it's been separated. Or it could mean that they're a scout and the rest of the pack is shortly behind them.

Though fierce, these creatures have a big flaw: they're extremely vulnerable to specific hit. You hit one in an especially vulnerable point (i.e. score a critical hit) and you've got a pretty good chance of killing one instantaneously.

This was a blind monster (name and image blacked out) given to me by Joe. I'm pretty pleased that the image looks nothing like what's in the book, though I do regret that the one has a way more interesting body in an abstact geometry kind of way.
Posted by Blanca Martinez de Rituerto at 08:00