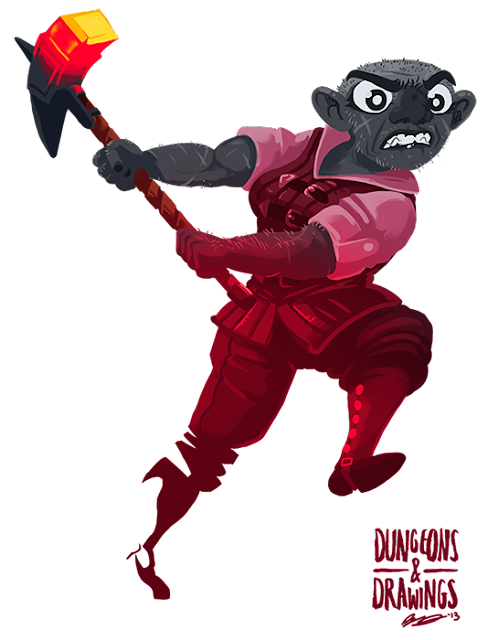 Like the drow, the duergar are a cold-hearted subterranean race of dark-skinned humanoids. Unlike the drow, they put on no airs of aristocratic refinement, despite thinking they're better than anybody else.

Duergar are deep believers that life is nothing but thankless, painful work, as the doctrines Laduguer state. The priests of their religion go through agonizing torture in order to prove themselves worthy. The rest of them are all craftsmen, creating beautiful treasure after treasure. However, they don't seem to indulge very much in them. The dress of the duergar is drab, without embellishment, while their works are locked away in deep trap-filled vaults. Life is work, not pleasure, even if it's the pleasure of artistic accomplishment.

Duergar also have a fascinating origin myth. Laduguer created the grey dwarves and taught them to work. And they did. But there was one dwarf, the Lone Craftsman, who would hide away from deific eyes and commit blasphemies: he created life. The Lone Craftsman made all the other races of the world and when Laduguer found out, he cursed him, transforming him into the first derro, another subterranan race made up of psychotic small man incapable of creation due to their small attention spans. So the Duergar see all other races as abominations and insults against their god. They especially hate other dwarves, seeing them as the Lone Craftsman's ultimate heresy. The only race they almost respect are gnomes, since they're almost as single-minded in their craftsmanship as the duergar.

They're tough to fight as well, with innate size-changing and invisibility abilities. I bet a good many adventurer has been smashed by an underground giant not realizing that they were fighting a dwarf.