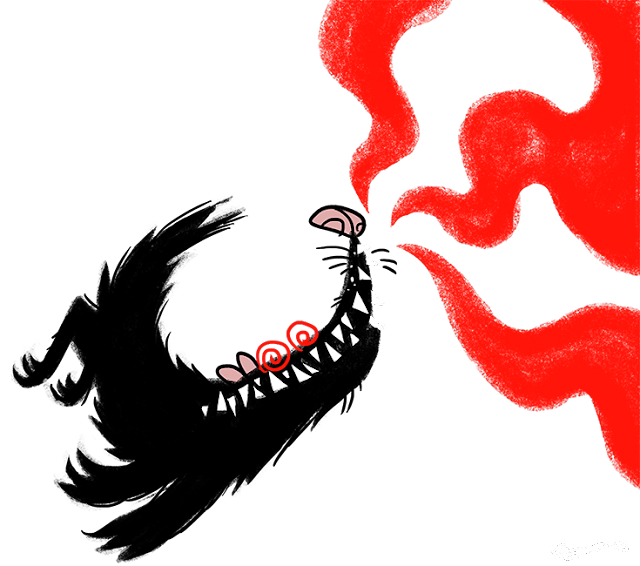 The Carcass Eater is a small animal a rat and a hound. As an animal whose main diet is comprised of carrion, its common haunts are graveyards, battlegrounds, abbatoirs and any other sort of place that would be home to heaps of rotting flesh. The Carcass Eater has a sharp sense of smell and can detect the smallest drop of blood, the scent of which drives it into a shark-like feeding frenzy. Its jaws are especially big, useful for tearing hunks of meat and breaking bones.

This was a blind image, given to me by Joe. I was kinda panicky when he gave it to me when I saw that it was an animal type creature. Animals tend to be, well, actual real creatures that either exist or have existed in the past; creatures of little intelligence and no magical ability. Sometimes there's bigger than usual. I was worried that he'd given me an actual animal and was worried that I was going to represent a real creature in a way that didn't represent it in reality. Which may have been interesting, now that I think about it, like how giraffes were drawn when the description was "camel-like creature with leopard spots". 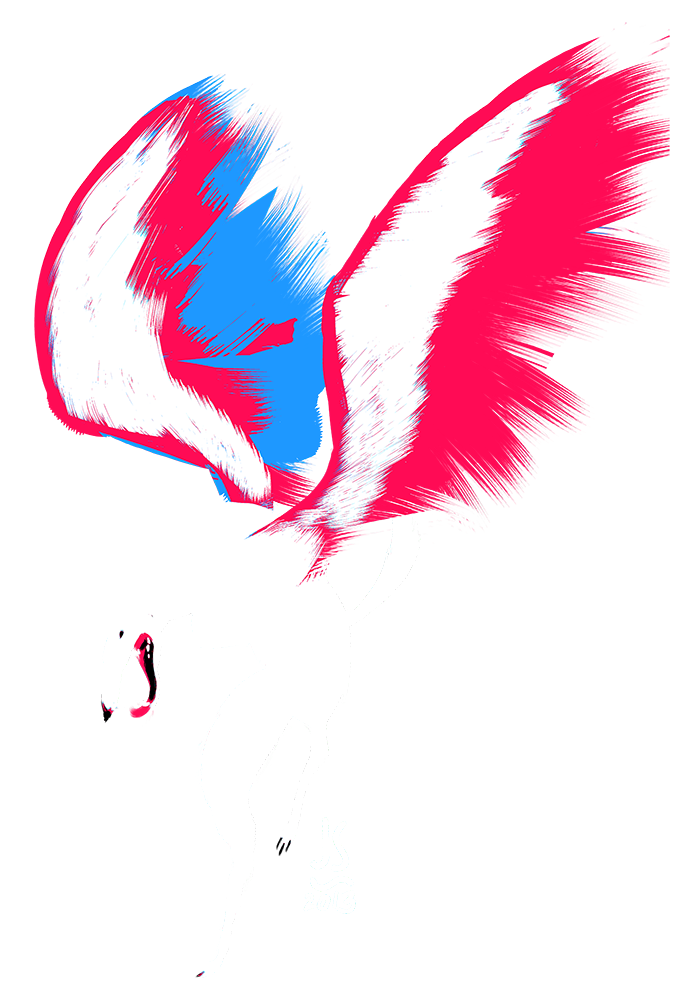 Semnurvs are intelligent magical beasts who fiercely serve as champions for goodness and law. They have the appearance of a large dog with enormous, colourful wings in place of forepaws, using them to swoop down on enemies from great heights.

Semnurvs (or Simurghs), far from their rather... furaffinity.net interpretation in D&D, are actually a genuine mythical creature from iranian folklore, which makes sense as they fit into the whole "winged mammals" thing that you get quite a lot in the middle east (sphinxes, lamassus etc). Persian myth, as with every other moderately obscure folkloric tradition, has some pretty interesting nuggets in there if you're prepared to look!

Fairly quick one this week, as I still have another to catch up on to bring me up to date. I used a combination of Paint Tool Sai and Photoshop. The first time I used a tablet to draw was using the old Painter Classic when I was a kid, and Sai's a similar sort of thing. Even though paint programs like that are obviously never going to be quite as charming as the real life painting they're trying to emulate, the physical feel of the colour is still really fun. It's nice how colour mixes and drags in ways that you don't get in photoshop. I want to be able to do more sophisticated painting in the program but I started off with something pretty basic and graphic.

We were busy at last weekend's Birmingham MCM Expo and we're gearing up to exhibit at the main London MCM this May! Dungeons & Drawings are working on some big things right now, so if you're in London or even in England at all, do consider dropping by, we'd love to say hi.

PS his head is modeled off a Borzoi, which I think is a particularly awesome-looking breed of dog.
Posted by Joe Sparrow at 11:19 0 comments 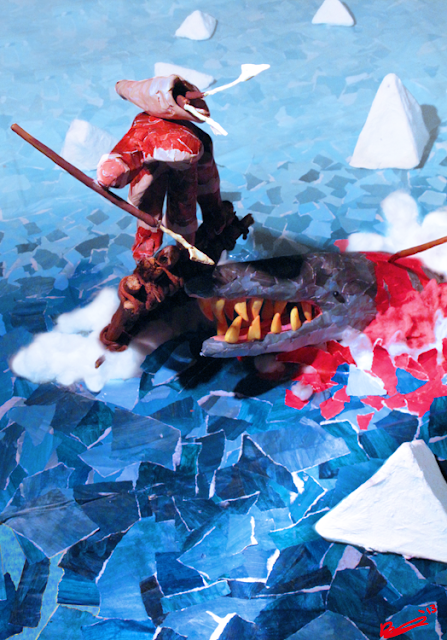 A Zeuglodon is a giant marine creature with a great crocodile-like maw and long-flexible body. Despite its vaguely reptilian shape, the Zeuglodon is a real-life ancestor of the whale. Like many whales, these fellas can be found primarily in cold waters. Despite their impressive teeth, the tail of the Zeuglodon is especially dangerous, being used to stun prey and break apart ships.

You know what I find tolerable? Model-building. You know what I find incredibly frustrating? Photography. The raft of the model was especially fun to make, which  is made from various sticks from around where I live. I decided to do this to challenge myself with some different materials, and was a good deal inspired by the model-work of my friend Grethe Bentsen.
Posted by Blanca Martinez de Rituerto at 09:59 1 comments 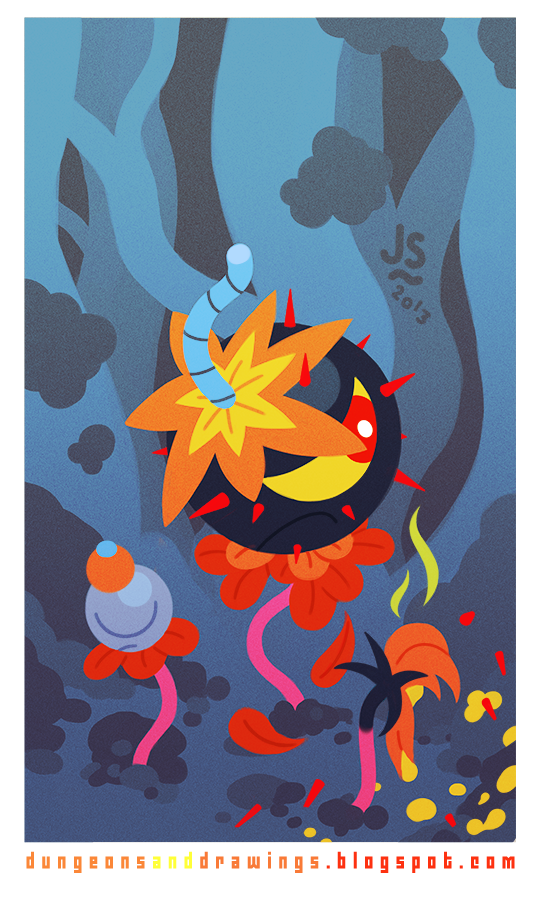 Standing in its ripened state no higher than a halfling, the Porcupine Cactus is so called for its bizarre method of seed dispersion. Rather than relying on its fruit to be digested, rainwater instead causes it to swell to an enormous size, whereupon any disturbance of the plant will result in its body rupturing, sowing the thornlike seeds in all directions. The Porcupine Cactus' detonation also serves a more greusome purpose - should the source of the disturbance be another creature, the volley of thorns may kill it, providing a fresh source of nutrients for the next generation.

This is another "blind" pick - Blanca chose the creature, then gave me nothing more than the text description, with the name blacked out. It's fun! I think I'd have probably gone for something more deliberately cactus-like if I'd known, which might have been a bit predictable. Its face - well, the eye, anyway - is part artistic flourish (ie I just like the way it looks) and part a response to the fact that the plant apparently possesses Low-light Vision. I know this is probably more a representation of the plant's ability to "sense" things around it but I just liked the idea that it would have a big eyeball. WELP

My posts have been pretty few and far between lately. I'm fairly busy! I promise I'll get back into the swing of things, though.

ALSO you can drop by the MCM Anime Expo in Birmingham next week and see Blanca and I! I'll be hawking my lame comics, too. Look for us in the Comic Village! Skirr are massive undead flying creatures. The appear as vaguely humanoid avian creatures with long-toothed bull heads, often covered in funeral wrappings, like a mummy would. The question is what are these creatures? Who mummified them? Why would they do that? Are they an ancient intelligent race? Demons? Corporeal gods? A physical manifestation of evil?

Whatever they were, the evidence is long gone. Now they're animal-like monsters, crawling from their ancient tombs and flying in vast empty places where someone might be stranded. They swoop down on their unfortunate victim and snatch them up in their talons. They fly up as high as they can then let the victim drop...

Joe picked this monster for me to draw this week. It might be something we do to challenge the other person to step out of their comfort zone. Normally I don't go for skeletons. I can draw skulls okay, but the complicated-ness of the rest of the bone structure muddles my head up some. But I'm quite happy with the way the bones in this look, especially the rib cage, especially considering the extra weird-shaped bones that birds have.
Posted by Blanca Martinez de Rituerto at 08:00 1 comments