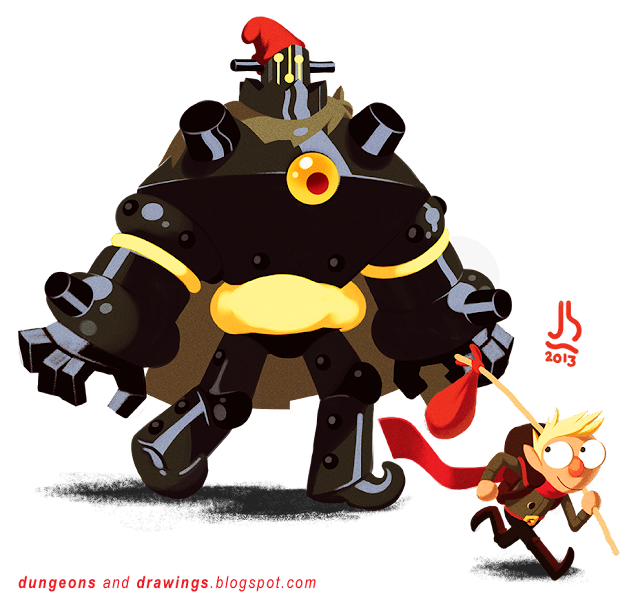 Beedle had been ready to run the moment he saw it move. Seasoned treasure-hunter or no, a gnome is wise to observe discretion over valour when, in the act of raiding some dead god's temple, he sees what appears to be a broad statue of bolted black metal shift its weight and come alive! Legging it out of the temple with a small sack-full of gold, he nevertheless considered the day well-spent.

It was the following night that he realised things would not go so smoothly. Awoken by an odd sound on the wind, he peered from his tent to note - with horror - that the statue had followed him! Rather than attacking him it simply stood, observing him with an unfaltering gaze.

At first, Beedle had made the obvious assumption that it was some avenging demon, set in place by its masters to protect their treasure. But the thing did not seem the least bit interested in the gold. It seemed rather to simply appreciate his company, and it followed him wherever he went. Whatever it was, it certainly had the gnomish spirit of adventure! It wasn't the slightest bit afraid of trespassing in ancient tombs and temples. And it was handy in a fight, too - the thing could pop a goblin's head off like a corked bottle!

The hat and cape were Beedle's idea, but he had a feeling the golem didn't mind. This would be the beginning of a beautiful friendship.

Zodars are pretty cool! A construct of unknown origin (no cop-out "a-wizard-made-it" backstory here; it's completely open), basically a shell of black metal filled with weird muscle-goo that can puff up to become strength 50 for a turn. For a medium-sized humanoid this is pretty crazy - but the interesting stuff is in the additional details.

Firstly, Zodars are actually capable of altering reality with a Wish spell once per year (although, the book tells us, they rarely deign to do so). Also, despite not having an intelligence score, they are capable of speech, although a Zodar is not likely to speak more than a sentence in a human's lifetime. And get this - when they do speak, every creature that hears it understands it regardless of what languages they know. Weird, huh? Also the armour Zodars are clad in is presumably some mysterious dimension X material because they are literally invulnerable to all damage except by bludgeoning weapons.

They sound sort of eccentric, too - apparently they occasionally travel around with adventuring groups on an enigmatic whim. The book sets it up that they're moved to do so by strange profound force but I like the idea that they just find adventuring fun.