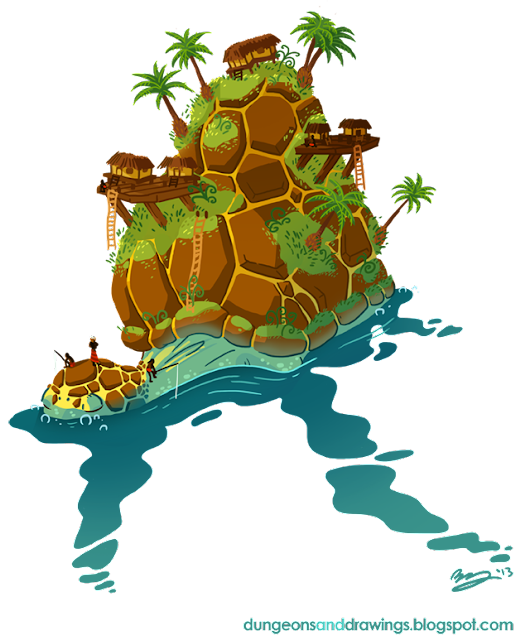 The Zaratan is an almost-legendary creature of the sea. There are islands that people get stranded on, but the island moves. It moves so slowly that the people on it don't realize that they're on a turtle instead of on land. This animal, while large and potentially dangerous, is also slow and lazy. It prefers to float on the surface of the water with its mouth open, letting fish fly into its gullet. The creature can't be actively directed like a ship or horse, but a musician may play certain songs that excite the giant turtle out of its ordinary stupor. It's uncertain whether these turtles are their own species or ordinary turtles who have grown over millenia. No young ones have ever been found.

The beast-landmass is a very well-trod trope in stories. It's usually a combination of the size and slowness of the creature. A titan, whale, giant turtle or other creature will be asleep for long enough (or simply slow enough) for vegetation to begin growing on its body. People unsuspectingly walk on or even inhabit the island before they realize they're on a living creature.

This trope first appears in the legends and folktales of ancient sea-faring cultures. Today, you can see this played out in the Discworld book series, Pokémon, Shadow of the Colossus, Avatar the Last Airbender and probably a ton of other entertainment. The Zaratan itself appears in Jose Luis Borges' The Book of Imaginary Beings.