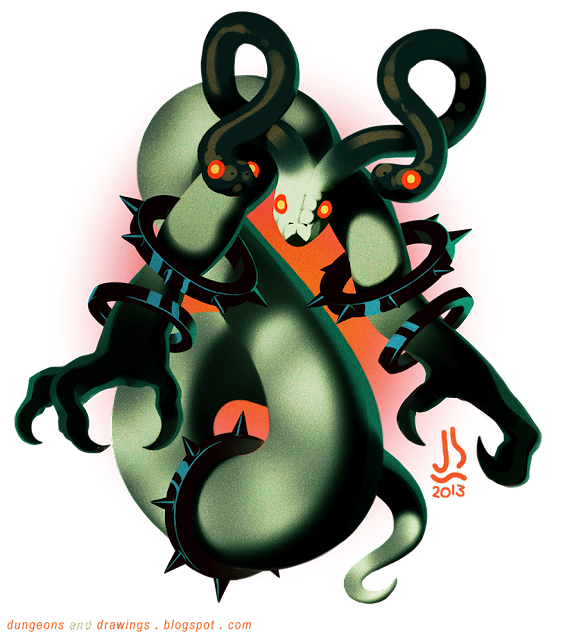 The Yuan-ti are an ancient bloodline of sorcerers who long ago traded their humanity for hideous power, becoming in the process horrifying, serpentine monsters. Almost the epitome of self-serving evil, Yuan-ti are to be feared without exception.

As a crossbreed between reptiles and men, Yuan-ti come in varying degrees of monstrousness. The most human-like, those called Purebloods, are in actuality the weakest, diluting their magical power for a more human appearance. At the other end of the spectrum sit those called Abominations, who often resemble little more than a giant snake with a twisted human torso and two muscled arms.

This one took me quite a few goes to get right, and I'm still not 100% happy with it. I started off with something maybe a little more realistic, but it looked a little too "anthro" in a way I really don't like - when characters have almost completely human bodies with a completely animalian head abruptly placed on top. Human anatomy and animal anatomy (particularly with snakes and lizards!) are so crazily different it feels lazy to just smash them together, so I tried to make it a bit weirder than that.

Also the idea of horns that are actually snakes was cool to me so I put that in there too.

The description of Abominations in the 3.5 MM is that of a large snake with "burly, humanoid arms". SOUND FAMILIAR??!?!?!?