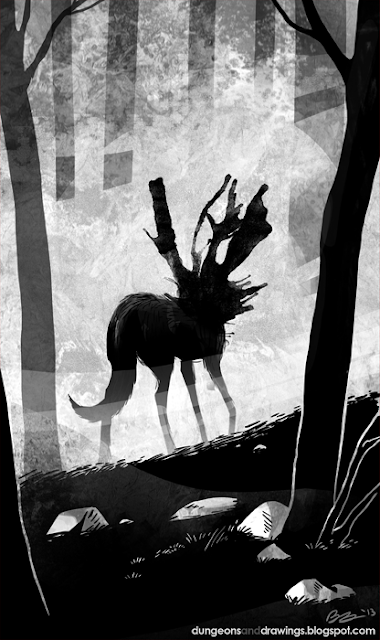 The Yeth Hound is one of many breeds of hellish dog. Packs of these slim headless hounts can be found in grey wastelands and barren moors, hunting unfortunate lost souls. The howl of the Yeth Hound is its greatest weapon and strikes fear into the hearts of those who hear before they even see it. The best protection against these creatures is light; they fear and hate light, and fade away to nothing in the sun's rays.

The mythology of the yeth hound is a lot more interesting than the illustration in the Monster Manual would have you believe. They appear in the folklore of the British Isles, being described as the Devil's headless hunting hounds. Other sources say that the yeth hound is the spirit of an unbaptized child. The Isles have a good deal of legends involving ghostly dogs and large cats prowling along the moors. They also go by the name of yell hound, wish hound or whist hound. Their cry is both terrifying and mournful.

So it's kind of a shame that since the Yeth Hound is a headless dog, the official illustration is of a dog with a vaguely humanoid face. Especially since there's already plenty of other kinds of hellhounds and beastly canines among the monsters of D&D.

Their native plane is also quite interesting. The Gray Wastes of Hades are a plane of neutral evil, located between Hell and the Abyss, and is used as the main battleground between devils and demons. It seems to be the opposite of the Blessed Fields of Elysium. Where Elysium is colourful, warm and euphoric, Hades is pale, cold and depressing. Like Elysium, it can alter the mood of those who live in it, this time by making you as morose and apathetic that you can't find the energy with which to leave. The plane drains you of colour and substance, until you become a translucent shade.

Also, try to find The Drolls, Traditions and Superstitions of Old Cornwall by Robert Hunt. It's an older book (1881), so it may be difficult to get a hold of. But it tells lots of neat stories of giant, fairies, ghosts and demons that haunt the English countryside, and its where I got my Yeth Hound info from.