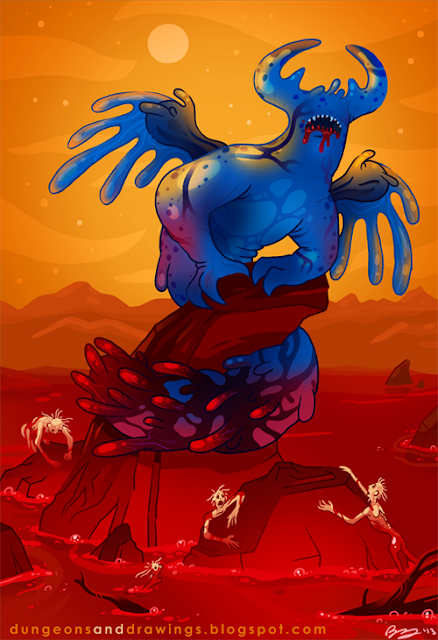 The Xerfilstyx, also known by its more comfortable name of Styx Devil, is one of the natural residents of the River Styx, a long trail of oily blood-like water that runs through all the Lower Plains. Due to the river's length, it's possible to encounter this creature in Hades, Carceri, the Abyss, Pandemoium... but it will be a far more common sight in its native dimension, the Nine Hell.

The creature itself is of great size, resembling a cross between a horned man and a slug, with large wings and a great deal of exsanguinating suckers on its tail. It's difficult to say whether its home in the River Styx mean it's immune to it, or constantly under its power. The Styx has memory-wiping properties and even dipping a finger in it can cause the erasure of hours of your life. Complete immersion would leave you a blank slate as your memories are washed down the river. The Styx Devil is insane, possessing few, if any, of its own memories, and temporary keeper to the memories of countless souls as they wash over it. But in its dark heart the devil doesn't feel torture or grief at the absence of self, but joy in enlightenment. And it wants to share this joy with everyone.

The Xerfilstyx is an extremely powerful creature. Its constant subjugation by the waters of its own home probably prevent it from rising up and challenging the Lords of Hell. It has a great number of powerful spells, both protective and offensive. The tail is an appendage to be avoided; once its suckers attach to a person, the devil begins to drain both blood and memories. The stolen blood can be heated through the creature's hellish veins, mixed with the Styx waters and regurgitates on other unfortunates in a spray of boiling gore and forgetfulness.

Interesting note: the River Styx of the D&D cosmology is more alike to the River Lethe of Greek mythology. This was one of five rivers in Hades, all with different properties. Lethe is forgetfulness, Styx is hatred, Acheron is pain, Phlegethon is a river of fire and Cocytus is lamentation (possibly a river of tears). The Styx in mythology is the largest and most important (gods would swear on the Styx, since the goddess that represented it was considered honorable and true). Strangely, Charon the Ferryman doesn't even transport souls across the Styx; he does it over the Acheron. Maybe the threat of the painful waters dissuades any souls with cold feet from jumping in and swimming back to the living world.