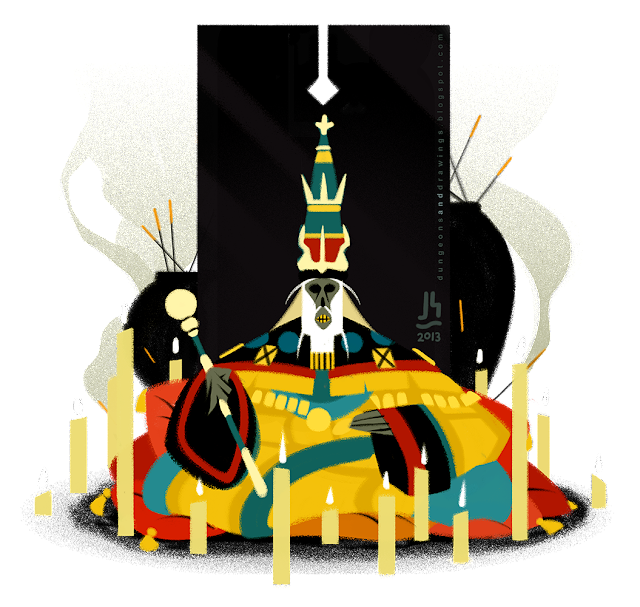 Wo Jia, Illustrious Scion of the Divine Kingly Bloodline and Peace-Loving Defender of the Sacred Light, reigned over the great Lowland kingdoms the better part of a century. His reign was an eventful one - he oversaw many great changes during his lifetime to which he always adapted in a way both harmonious and supremely willful, with the interests of the common man ever at heart.

Despite the Lowlands being sandwiched between the aggressively expansionistic Dwarvish Commonwealth and the fervorous hordes of Kord, his Kingdom saw no war for the entire duration of his earthly reign. Indeed, he was so well-loved by his people that when he neared his end during an illness in his 117th year, there was panic among the nobles of his court. There was no heir to succeed him! How would the Kingdom continue to prosper without Wo Jia?

An agreement was reached. The ritual was performed in secret by a wizard - better for the public not to know, really. The ruse was faultless. At first, the difference was barely noticeable, since his flesh was already wasted away. They bathed him daily in perfumes, and incense was always burned in his presence. Over the years, though, it was clear to any onlooker with eyes to see; his skin was tanned like leather now, taut over bone like some delicate drum. If the people suspected, however, no man ever spoke of it. The King yet reigned, and the Lowlands flowered under his guidance.


So, 200 images! Well, this is the 201st, I think. Blanca and I thought we'd celebrate by posting some of the most iconic creatures in the entirety of D&D - both ever-popular villains - the Red Dragon and the Lich (neither of which, miraculously, we've done before!). So, another big soppy thankyou (the second in a row) to everyone for sticking with us.

The Lich is pretty much the go-to guy for a scheming villain these days. Whether it's the eponymous villain of WoW's second expansion or Order of the Stick's cliché-embracing Xykon, a malevolent dead sorcerer is going to tick most of your boxes. Which isn't to say the formula isn't open to reinvention - one of the most popular villains of the last decade is actually a Lich! Who, you ask? Well, a Lich's defining characteristic is that he stores his immortal soul safely in a small trinket, called a Phylactery, in order to shield it from harm, rendering him unable to truly die. Can you think of any bad guys of recent years who would do something like that? Hint: he does it more than once!

Anyway, another big post. I'm not 100% fond of the image, but the idea of a Lich made out of good intentions is something I've been rolling about in my brain for a while. Enjoy!