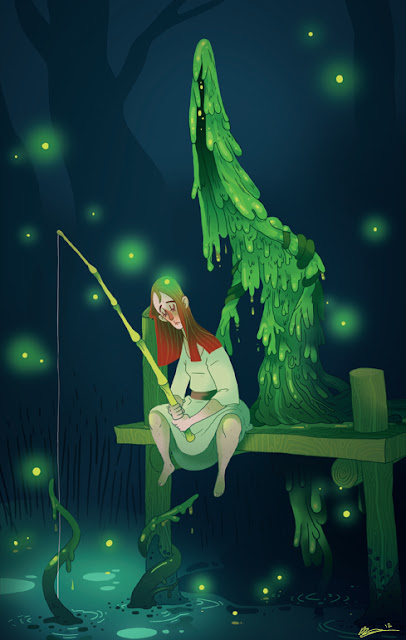 Though named a Vine Horror, this creature is a sentient mass of algae that lumps itself together into a vaguely humanoid form. It has two main abilities: one to is animate vines (or similar plants) that will strange its opponents; the other ability is its extreme malleability. As mentioned, since the creature is made up of algae, it has no bone or bone-like structure. Because of this, a vine horror can effortlessly force its slimy body through a space as small as an inch without.

Many plant creatures are either mindless consumers or sentient protectors of nature. While it can be fiercely territorial over its patch of swamp, it doesn't care about it on any spiritual level. Because its body is so gooey and saturated with water, the Vine Horror doesn't care about fire and is able to protect itself from most weapons.

The Vine Horror is capable of speech, albeit the somewhat esoteric Sylvan, and is capable of reason. Debate is discouraged, however.
Posted by Blanca Martinez de Rituerto at 15:50