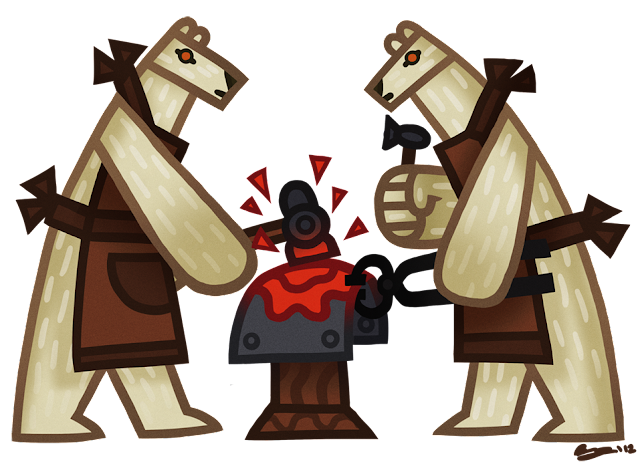 Dag nabbit, Phillip Pullman, it's your fault fantasy is required to have at least one armored bear in it now. Well I ain't gonna draw no bears in armor (plenty of those) and they're supposedly good at making armor so... Also more people need to draw bear men the way bears actually look when they stand up: weird and skinny. They're like buff weasels.

Urskans are D&D's required warrior bear-in-armor race. I'm showing them here standing up, which is a pose they're comfortable with, but you'll  be more likely to encounter them on all fours. They have a thumb that's just opposable enough to wield tools, but not opposable enough to make a common habit out of it. In battle, they're more likely to use steel-clawed gauntlets than an actual weapon. Like the Salamanders, Urskans are excellent smiths. But where Salamanders get their skill from mastery of fire, Urskans get it from sheer brute strength, which probably makes them better for making big crude things rather than dainty little things.

Also, they wear half-plate. Seems a little strange since half-plate is described as plates of armor attached to chainmail and leather. Making those little loops for chainmail is delicate, intensive work. Just imagine one of these guys squinting down as they try to bend a tiny ring. You'd think they'd just go for straight-up plate. Maybe it's to avoid breaking the ice sheets they walk on.

Another thing I love about doing stuff for this blog is an excuse to look up trades as well as monsters. Armoring's pretty cool and despite what this image might imply, you don't really need that much heat, just a lot of hammering. You might need some extra heat it you're trying to hammer a one inch thick piece of plate though.