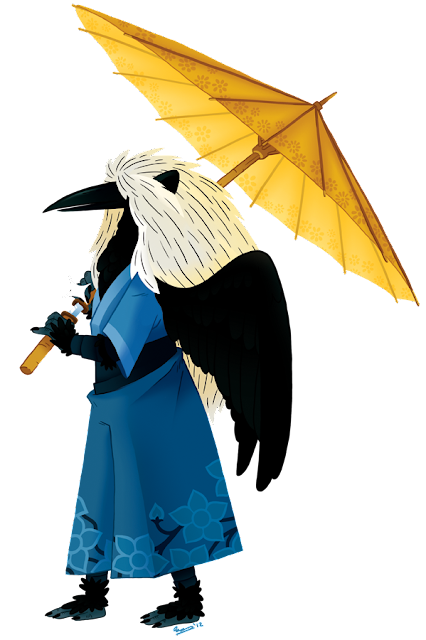 Beware of strange sounds on the misty mountains.

The tengu and the kenku both have the same mythological origin: the karasu tengu, or crow-headed tengu, mountain-dwelling, anthropomorphic bird swordsmen. Kenku is another acceptable term for tengu. It's a well-known creature of Japanse folklore, alongside kitsune, kappa and tanuki. It's said that the tengu would sometimes take on human pupils and teach them their own unorthodox fighting techniques. The tengu from Oriental Adventures is closest to its roots than the kenku, the latter essentiall being avian kobolds.

Tengu are nimble fighters, relying more on speed than strength. The setting may be Japan-inspired, but just because you teach samurai that doesn't mean you have to be obsessed with honor. Tengu use a combination of ambush techniques, illusions, intimidation and the buffeting of their wings to keep their opponent off balance. Despite this, they're not opposed to a good old fashioned duel.

I love doing creatures inspire by non-Western mythology because it really gives you an excuse to look up some new things. Japanese ukiyo-e and prints are absolutely beautiful and the fairy tales and folklore is really sweet. I've been on a pretty big fairy tale and folklore binge lately. This image of the tengu is partially inspired by this one, a painting by Katsushika Hokusai.
Posted by Blanca Martinez de Rituerto at 12:00