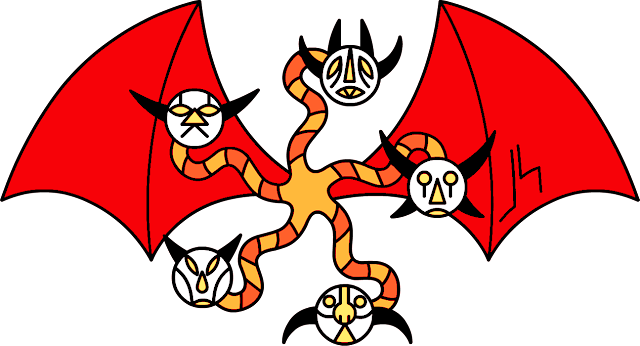 Shrieking Terrors are bizarre hybrids between the many-headed Hydra and the bat-like Vargouille. Their simple, starfish-shaped bodies support a head at the end of each arm with only a pair of leathery wings to hoist the creature aloft for movement. The heads themselves posses many of the same capabilities as an ordinary Vargouille, including a poisonous bite attack and the horrible "Vargouille's Kiss" - a perversely tender gesture by which the Shrieking Terror marks its victim with a curse that causes them to rapidly undergo a monstrous transformation into a Vargouille themselves!

Foes of the Shrieking Terror attack it with caution - its body restores itself quickly in the manner of a hydra, and each head, if severed, will quickly regrow twofold.

Apologies to those who aren't as keen on the more graphic style - it's a little quicker for me to work in and I wanted to catch up so Blanca and I are in sync again (Blanca's currently technically a week ahead!).  I've been reading a book I was bought recently containing Miyazaki's watercolour sketches for Nausicaä (both the movie and the comic), and I guess this is inspired by the tapestries at the start of the movie, the ones depicting the war and the God Warrior in this nice primitive style. I actually quite like the picture of the Shrieking Terror in the MM3, so check it out!
Posted by Joe Sparrow at 16:38