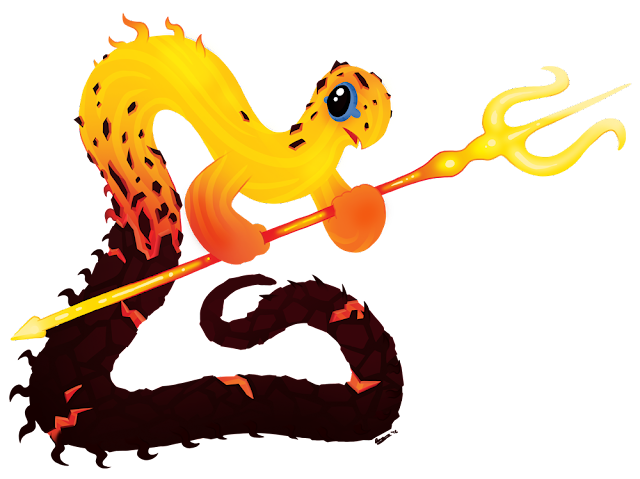 Salamanders are serpentine creatures from the Elemental Plane of Fire. Like a lot of fiery creatures, they're the sort of monster that you don't want to touch unless you've got your fire resistance spells up. Or like blisters. They can also transfer heat through their weapons so there's that too.

They're not especially strong creatures, though they're quite intelligent and difficult to damage unless you've got some magic weapons (which you should probably have if you were doing the planar travel shenanigans). They make pretty good guardians if you need your temple guarded by something that can probably subsit on coal and wood. They also have a tendency to get summoned by people who want them some finely crafted metalworks, since these guys are also very skilled blacksmiths.

There are different levels of salamander too. You've got your average salamander, which is pretty dangerous. There's also smaller guys called flamebrothers, which tend to get pushed around by their larger bretheren. Then you have salamander nobles, which can get pretty big, are master smiths and have all sorts of nasty fire-based spells that include summoning Huge fire elementals.

Bring some oven gloves and some cold spells is what I'm saying.
Posted by Blanca Martinez de Rituerto at 08:00